Top 10 Memorable Moments of the Brickyard 400 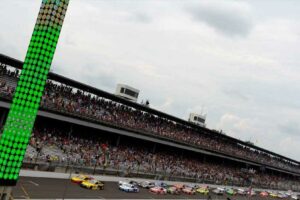 A native of South Bend, Indiana, Ryan Newman was looking to finally break through for his first victory on the 2013 Cup Series season at Indianapolis after finding out that he would not be returning to Stewart-Haas Racing the following year.

Newman earned the pole for the Brickyard 400 but found himself in a heated battle with Jimmie Johnson, who was looking to become the first driver to win the prestigious event five times during his career.

With cautions and passing at a premium, pit stops ended up deciding the win between Newman and Johnson. A poor sequence from Johnson’s crew during the final stop was enough for Newman to take control of the race in the final 12 laps and score a victory in front of his home crowd.

Although rain postponed the 2018 running of the Brickyard 400 from Sunday, the fans that elected to stay for Monday witnessed an event that featured more parity and strategy compared to previous years.

Denny Hamlin, Clint Bowyer, Kevin Harvick and Kurt Busch were among those that took turns at the front of the field because of the diverse strategies, while Matt Kenseth ended up claiming a stage victory after he began splitting up the schedule in the No. 6 with Trevor Bayne just a few weeks earlier.

A late crash between Jeffrey Earnhardt and Landon Cassill gave Brad Keselowski the opportunity he needed to pass Hamlin with fresher tires on a green-white-checkered for his first Brickyard 400 win. Hamlin was not pleased with the circumstances that led to him losing the race and famously pondered why ‘meaningless lap cars’ were allowed on track during an interview.

An accident between the two dominant cars in Kyle Busch and Martin Truex Jr. with just under 50 laps remaining opened the door for anyone to take the 2017 Brickyard 400.

Matt Kenseth and Brad Keselowski each shared the lead over the ensuing 31-lap green flag run but a multi-car accident between Clint Bowyer, Kurt Busch and Erik Jones occurred while Kasey Kahne was in the pits, giving him control of the race during the final ten laps.

Several more cautions eliminated drivers like Jimmie Johnson, Kyle Larson and Ryan Blaney, all while the race came closer to being ended prematurely by darkness. Kahne successfully withstood every single challenge Keselowski provided to claim what would be his final victory in the Cup Series.

The Menard family has long been synonymous with the Indianapolis 500, having fielded cars for drivers like Al Unser, Johnny Rutherford and Tony Stewart but never once visiting victory lane at the historic track.

Paul finally broke through for his first victory at the track that meant so much to his family in dramatic fashion. He was tasked with holding off Jeff Gordon with a dwindling fuel supply but saved just enough to earn the opportunity to kiss the bricks on the frontstretch.

Growing up, Tony Stewart dreamed of one day racing at Indianapolis and establishing his own legacy in motorsports after watching his childhood hero A.J. Foyt win his fourth Indianapolis 500 in 1977.

Stewart started out in open-wheel competition himself before soon making a full-time transition over to NASCAR in 1999. Stewart had already won a title with Joe Gibbs Racing by the start of the 2005 season but he sought to finally check the Brickyard 400 off his bucket list while pursuing another championship.

Kasey Kahne was the strongest obstacle standing in front of that goal but a perfectly-timed restart by Stewart with 10 to go gave Stewart a lead he would not relinquish. To celebrate the momentous occasion, Stewart and his crew climbed the fronstretch fence, mirroring a celebration started by Helio Castroneves a few years earlier.

Already a winner of the Indianapolis 500 back in 2000, Juan Pablo Montoya was determined to visit victory lane at Indianapolis behind the wheel of a stock car.

Despite only winning one Cup Series race prior to the 2009 Brickyard 400, Earnhardt Ganassi Racing supplied Montoya a perfect car on the afternoon. Not a single driver could touch the IndyCar and Formula One veteran as he proceeded to lead 116 of the event’s first 124 laps.

Everything unraveled for Montoya when he was caught speeding on pit road during the final stop of the afternoon. A furious Montoya desperately pleaded his case against the penalty but he would be forced to settle for a disappointing 11th place finish while Jimmie Johnson tallied his second Brickyard 400 win.

Jeff Gordon had a dream of one day racing in the Indianapolis 500 but a lack of funding forced him to abandon those plans and pursue NASCAR, where he ultimately landed a full-time ride with Hendrick Motorsports in 1993.

Even though he never turned a competitive lap in an open wheel car at Indianapolis, Gordon ended up becoming the most successful stock car driver in the history of the track with four victories prior to the 2014 season.

Gordon’s fifth and final victory, which he accomplished after passing Kasey Kahne on the high side during the last restart, put him above legends like A.J. Foyt, Al Unser and Rick Mears by becoming the first driver in all motorsports at Indianapolis to win five races at the track.

The City of Indianapolis deemed the day Jeff Gordon day on the same morning that Rick Hendrick boldly guaranteed a victory by his No. 24 team.

The Brickyard 400 had become a massive success for NASCAR and Indianapolis in its third year, with the controversial split between CART and the IRL only bolstering its popularity amongst drivers and motorsports fans.

1996 proved to be another great year for the event. Johnny Benson Jr. led a race-high 70 laps but Dale Jarrett was the one celebrating in victory lane after he patiently bided his time behind teammate Ernie Irvan and passed him with seven laps remaining.

Jarrett commemorated the historic moment in his career by kissing the yard of bricks on the frontstretch alongside his crew. This ended up sparking a cherished tradition in the Brickyard 400 that eventually spilled over into the prestigious Indianapolis 500.

For a brief period of time, the Brickyard 400 rivaled NASCAR’s most prestigious race in the Daytona 500 when it came to attendance, race purse and notoriety.

Those comparisons came to an end during the 2008 Brickyard 400 when a combination of Indianapolis’ abrasive surface and the load being put down on tires by the Car of Tomorrow in its first appearance at the track resulted in numerous blowouts throughout the weekend.

These problems were not mitigated before the race and NASCAR was forced to throw competition cautions every 10-12 laps. The end result left a bad impression in the eyes of fans and attendance steadily declined over the next 12 years, ultimately forcing NASCAR and Indianapolis to scrap the Brickyard 400 in favor of a 200-mile event on the infield road course.

Following years of strenuous negotiations, NASCAR finally landed a date at Indianapolis during the 1994 season. Drivers from several different NASCAR divisions, along with former Indianapolis 500 winners, all wanted an opportunity to run in the track’s first stock car race, with the final entry list consisting of 86 cars.

One of the most hyped races in NASCAR history met the expectations of both fans and drivers. The event featured several notable moments like Dale Earnhardt bouncing off the wall on the first lap and Brett Bodine spinning his brother Geoffrey Bodine for the lead, which strained the relationship between the two for years afterwards.

The fight for the first Brickyard 400 came down between veteran Ernie Irvan and local newcomer Jeff Gordon. Irvan and Gordon traded the lead several times during the final 25 laps until Irvan cut down a tire with five laps remaining, allowing Gordon to hold off Brett Bodine for one of the most significant victories of his career.