Tony Stewart Says Kyle Larson Is Better Than He Was 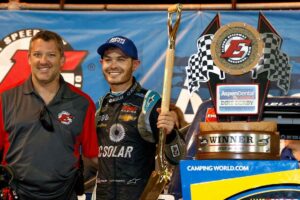 The three-time NASCAR Cup Series and IndyCar Series champion himself took a step further during the pre-race show for the Dirt Late Model Dream at Eldora Speedway.

“Kyle Larson is better than I was.”

Does he really believe that?

Is @KyleLarsonRacin better than @TonyStewart?
Smoke makes a BIG statement on the matter.

Stewart himself is an archetype of AJ Foyt, his hero, who replicated Super Tex in every facet of his professional driving career. Stewart captured all three USAC National championships in 1995, comprising of Midgets, Sprint Cars and Silver Crown Champ Cars, and was fast tracked to the Indy Racing League as a result.

He captured the 1997 IRL IndyCar Championship and began the transition to NASCAR where he earned three championships, 49 victories at the highest level and was inducted into the sanctioning body’s Hall of Fame in 2000.

He remained a mainstay in dirt racing throughout his career and has already won in a Sprint Car twice in 2021 at 50-years-old.

Larson has followed that model in carving his own legend.

He is one of only two drivers in the 41-year history of the 4-Crown Nationals at Eldora to sweep all three USAC events in one night. The legendary Jack Hewitt completed the sweep back in 1998. It was that feat that Stewart, who knows owns and operates Eldora, realized he was watching the start of something special.

“I honestly do,” Stewart said. “I remember watching him during the first time he ran the 4-Crown Nationals, and won all three races, in his first time racing here. This isn’t the easiest place to come to for your first time and for him to take a Midget, and a Sprint Car, and a Silver Crown and just dominate in the fashion that he did.”

Larson was just 19 at the time.

Since then, Larson has become a contender in NASCAR, but that career suffered a setback last year when he was fired and suspended for using a racial slur on an iRacing broadcast. He has since attended sensitivity training and spent a considerable amount of time with numerous inner-city youth foundations.

He also spent last summer primarily racing on dirt where he won 47 times in 96 appearances, including wins in his first handful of Dirt Late Model appearances. He signed with Hendrick Motorsports over the winter and has won three times early in the Cup Series season, while also continuing to win on dirt throughout the spring.

Larson is on a Stewart like run right now and Smoke recognizes it.

“To see him come here in a Winged Sprint Car and now a Late Model, anything he gets in, he wins in,” Stewart said. “The incredible thing about Kyle is that most drivers have to really think about what they’re doing as they do it. Kyle? He’s plug and play, man. You just plug him in the car, send him off and he’ll figure it out very naturally.”

“In an era where technology is better, the competition is much closer than its ever been, and for him to dominate in so many different cars, that’s hard to do.”