Timothy Peters back full-time in the NASCAR Truck Series 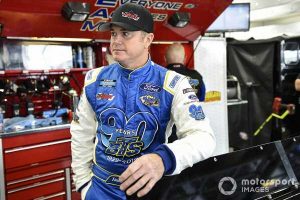 The 40-year-old will pilot the No. 25 Rackley Roofing Chevrolet Silverado in his return to fulltime competition this year. Rackley W.A.R is co-owned by Willie Allen and Curtis Sutton and will make their debut in February’s season-opener at Daytona International Speedway.

“It has always been a dream to be a NASCAR owner,” Allen said in a release from the team. “We are excited about the all-star team we have assembled. I am thankful to have partnered with Curtis Sutton, as we both are driven to succeed. Our team is assembled with very humble and hungry individuals, and we are a close family who want to achieve greatness.”

Peters is a veteran of the Truck Series with eleven victories in 248 starts. He hasn’t run the complete schedule since 2016, but has made at least one start in every season since then.

“The NASCAR Camping World Truck Series has always been special, and to have the opportunity to return to full time competition is a blessing,” Peters said. “I am very grateful to Willie Allen and Curtis Sutton for the opportunity to represent Rackley Roofing and W.A.R. Shocks. Both gentlemen are top-notch people with a singular determination to win on and off the track.”

Chad Kendrick will serve as Peters’ crew chief. The duo have worked together in the past, winning at Martinsville in 2009. Kendrick has been atop the pit box in over 260 Truck Series races and called the shots for several current Cup stars as they rose through the ranks.