The Wild Way the Bowman Gray Championship Was Won and Lost 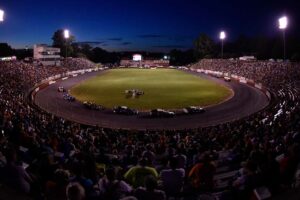 The event began under considerable anticipation in advance of Brown and Myers preparing to race for an unprecedented 11th Tour Type Modified championship at NASCAR’s most explosive weekly sanctioned short track.

There was also a full moon, predictably.

With 43 laps to go, Ward interjected himself into the championship narrative with a retaliatory act against Myers under caution after being spun while racing for third. Ward preceded to chase Myers around the track under caution, drilling the 10-time champion from behind, and ultimately sending him around.

Things are getting spicy at Bowman Gray. pic.twitter.com/nJ1Q4cRJFV

Brown entered the night with a four-point championship lead over Myers and simply needed to finish the night ahead of his fellow 10-time champion. However, at the time of the incident, Brown was running fifth and at-risk of losing the championship lead if Myers continued his steady charge towards the front.

Myers was given his third place running order back for the restart, with Ward sat down for the night by track officials, but the damage was already done. Brown was able to get by Myers on the restart and finished fifth ahead of Brown in sixth.

Ward had also cut across in front of Myers during his statement lap under caution.

“It killed my front end,” Myers said. “The tow was knocked out and the front end was flopping around. The only way I could do anything was run my left front off the track to make the car turn. We were just wounded at that point.”

While Ward was disappointed that the incident escalated the way it did, he justified the behavior against Myers and said that he wasn’t going to tolerate getting spun by rival competitors.

Even if it meant deciding the outcome of a championship.

“We shouldn’t have to race like that,” Ward said. “We were going to have more restarts and if [Myers] was better than us, he would have gotten back around us. I tried to be respectful but we’re here to win races. I hate it came down to that but if I had to do it all over again, I would.”

Myers said he learned something above all else on Saturday.

Meanwhile, this is the sort of drama that nearly 15,000 people show up for every weekend at Bowman Gray, a football stadium for Winston-Salem State University that gets converted for motorsports use every summer until kickoff.

The signature division is the same cars used in the NASCAR Whelen Modified Tour.

Those in attendance were ecstatic to take part in the revelry and to serenade the first 11-time champion in track history. Myers had won the previous four championships, not counting a 2020 campaign canceled by COVID-19.

Brown hadn’t won a championship since 2014 and he was overcome by the achievement in victory lane.

“It’s been a long time since we’ve won [a championship],” Brown said. “I forgot how much this means to me, my fans, my family and my race team. I’m speechless, I’m tired, we’ve worked hard all year and we’ve finally done it. We are 11-time champions.”

Brown dedicated the championship to his late grandfather and father, whom he wished could have witnessed him secure the milestone that was decades in the making.

Concerns surrounding a recent surge in COVID-19 also meant that Brown’s wife and children were not able to celebrate with him at the track. While he was disappointed that his family could not attend Saturday’s finale, he did not let the circumstances damper one of the proudest moments of his career.

Now 50 years old, Brown holds sole possession of the most championships and victories in Bowman Gray’s 72-year history with no intentions of slowing down.

Meanwhile, Myers and Ward aren’t done yet either, with championship pursuits or each other after what transpired on Saturday night.

“People like Brandon Ward need to realize that this is not how you do things here,” Myers said. “Even though it’s kind of perceived that this is how people race over here, you have to be in contention at the end if you want to try and win a championship.

“He walks around the pits like he’s the nicest guy and then runs over everyone.”

Ward went winless in 2021 after a four-win 2019 campaign, so this night meant just as much to him, he claims.

“We were racing for a win and he was racing for a championship,” Ward said. “We were looking at a good chance to get third place in the points if we couldn’t win. Myers forgets that he runs into people.”

Just another full moon on championship night at The Madhouse.