Home » Racing » The ‘what if?’ career of Nurburgring’s last F1 podium finisher

The ‘what if?’ career of Nurburgring’s last F1 podium finisher 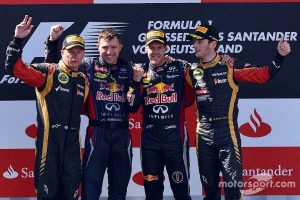 Formula 1 returns to the Nurburgring for the first time in seven years this weekend. But, while Kimi Raikkonen is set to make history, there is another driver who joined him on the 2013 German GP podium who is facing a less tangible legacy

When Formula 1 returns to the Nurburgring this weekend, it’s got a lot to live up to.

In addition to the century of grand prix racing history at the venue – Green Hell and all – the last F1 race back in 2013 was a cracker. Yes, it ended with Sebastian Vettel taking his fourth win (of 13) of that season, but that barely scratches its surface.

This was a race that really should have been won by the Lotus squad and not the era’s dominant team, Red Bull. The event’s gloriously hot weather, combined with introduction of new rear tyre constructions after the Silverstone blowouts that year, turned the pre-race expectation that it would be a Red Bull vs Mercedes (which started on pole with Lewis Hamilton) affair on its head.