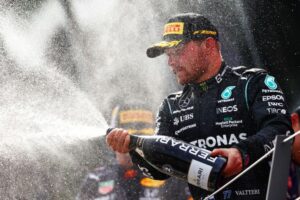 Valtteri Bottas’ second-place finish in the F1 Austrian Grand Prix at Spielberg, Austria, on June 4 was his fifth podium of the 2021 season and 61st of his Formula 1 career.

With No. 61, Bottas passed three-time champion Nelson Piquet for 10th on the all-time list of most career podium finishes for a driver in Formula 1. This list includes seven F1 champions and three others who have finished runner-up in the championship.

David Coulthard celebrates his 62nd and final podium in 2008 at the F1 Canadian Grand Prix in Montreal. Coulthard’s career spanned from 1994 to 2008 and included 246 starts. Coulthard won 13 times and finished runner-up in the championship to Michael Schumacher in 2001.

Rubens Barrichello was one of the more prolific drivers in Formula 1 history, starting 322 races in a 19-year career from 1993 through 2011. Barerichello reached the podium 68 times and won 11 races. His best finish in the championship was second, which he accomplished in both 2002 and 2004 as teammate of Michael Schumacher at Ferrari.

There was a time, not all that long ago, when it looked like Fernando Alonso might just ride the wave to the top of this list. Through the first six years of his Formula 1 career, from 2001-07, Alonso reached the podium 49 times. He also added 42 more podiums from 2010-13. However, Alonso has not reached a podium since 2014. Through the 2021 F1 Austrian Grand Prix, Alonso had 97 podiums and 32 wins in 321 starts. His most recent win came in 2013.

All told, he has 103 podiums in 339 starts through the 2021 Austrian Grand Prix. He biggest run of podiums came between 2005 and 2008 when he make the walk to the victory stand 39 times in four seasons. His most recent podium came in Brazil in the second-to-last race of the 2018 campaign.

Alain Prost, a four-time F1 champion, is second all-time with a 52.5 percent success rate in making to the podium. He made 106 tips to to the podium in 202 F1 starts.

His best season for podiums, surprisingly, was not one of his four championship season, as he finished in the top-three in 14 of 16 races in 1988. Arton Senna won the F1 title that year with 11 top-3s and eight wins. Prost, who scored 51 career wins, won seven races that 1988 season but fell three points shy in the championship.

Four-time champion Sebastian Vettel makes the podium on this list with the third-most podiums in F1 history. Vettel extended a current streak of consecutive seasons with at least one podium to 14 when he finished second at the 2021 F1 Azerbaijan Grand Prix. Through the 2021 Austrian Grand Prix, Vettel checks in with 122 podiums in 266 starts.

No one is catching Michael Schumacher for No. 2 on this list anytime soon. The seven-time champion had 155 podiums in 306 starts to become one of just three drivers with more than 50 podiums to reach the podium in more than 50 percent of his races. Schumacher also had a stretch of 15 consecutive years with at least one podium from 1992 through 2006.

About the only question surrounding this category is when, not if, Lewis Hamilton reaches the 200-podium milestone. Hamilton is first all-time in podium percentage of those with at least 50 podiums (171 podiums in 275 starts, 62.2 percent) through the 2021 Austrian Grand Prix.

Hamilton has been a model of greatness throughout his career, earning at least five podiums in each of his 15 seasons in Formula 1. He is signed to race with Mercedes through at least 2023.