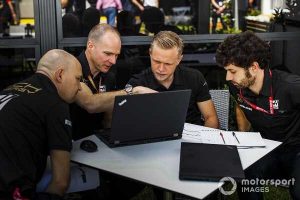 Formula 1 might be a high-tech endeavour, but the human relationship between the driver and their race engineer is a make-or-break element of it. And this is one aspect of F1 that can’t be optimised with a computer, says Alex Kalinauckas.

A Formula 1 driver is the sole occupant of the cockpit. But they are far from alone.

The radio connects them to their engineers – chiefly, their race and performance engineers – but also a wider selection of senior personnel if a situation requires further input. These voices are key to every driver’s session – and some of them, such as Peter Bonnington (Lewis Hamilton’s Mercedes race engineer) – or Rob Smedley, who made a famous connection with Felipe Massa at Ferrari, become well-known as a result.

There are other engineers that make up the vital team-within-a-team for every driver – tyre specialists, aerodynamicists, controls engineers, engine engineers, and on it goes. An F1 driver can really never succeed alone.