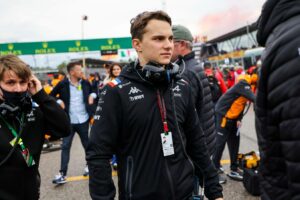 Oscar Piastri could be heading for Williams in 2023 according to a “paddock rumour” revealed by Sky F1 broadcaster Ted Kravitz.

The Australian driver looks to be next in line for a Formula 1 race seat after winning the F3 and F2 titles in back-to-back seasons.

He is spending this year on the sidelines as reserve and development driver for Alpine, to whom he is attached as a member of their academy, soaking up as much knowledge as possible for when the inevitable opportunity arrives.

2 days of testing in Austin done! An awesome experience on an amazing track. https://t.co/EFWJihahWn

Alpine have no room at the inn just now due to the presence of Esteban Ocon, who is contracted to the end of 2024, and Fernando Alonso.

A ‘loan’ move for Piastri looks a possibility should such an opening materialise, and earlier this season Alpine offered to make him available to McLaren if Daniel Ricciardo had failed to recover from Covid in time to take part in the Bahrain Grand Prix – which he did.

However, Kravitz, in his post-race Ted’s Notebook for the Emilia Romagna Grand Prix, suggested Piastri, 21, could find his way onto the F1 grid with Williams next season.

“One of the latest paddock rumours has Williams interested in the services of Oscar Piastri,” said Kravitz during the programme he presents.

“I don’t know if that will be in place of Alex Albon or Nicholas Latifi as both are very happy and ensconced within this team at Williams, but it’s one to look out for later in the season.”

From 2019-21, Williams took George Russell on a loan-style deal from Mercedes and after a blank first two seasons for them, he scored 16 points in the last of those three campaigns.

This year, they have partnered Latifi with Alex Albon, who took Russell’s place after joining from Red Bull – although his former team still retain an option on him for the future.

Albon has outperformed Latifi so far this season in every race and collected Williams’ first point of 2022 by finishing 10th in the Australian Grand Prix.

Alpine CEO Laurent Rossi confirmed recently he would be open to loaning Piastri, saying: “If it’s a solution that allows me to get him back at some point, I might think about it. I’m not opposed to the solution.

“You understand I want to develop Oscar – I don’t want to leave him sitting on the bench waiting forever.”