Superstar Racing Experience Giving Fans What They Want at Knoxville 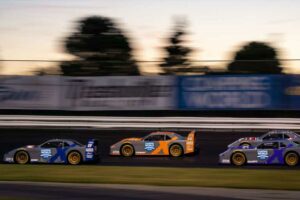 Superstar Racing Experience is just for fun so why wouldn’t Ray Evernham and Company listen to fans when provided constructive feedback?

That’s exactly what they did.

Just four days after drawing over 10,000 fans to Stafford Motor Speedway and earning 1.3 million viewers on CBS, Evernham says SRX is making a handful changes based on fan reaction to the debut event before rolling into Knoxville Raceway this weekend.

The two heat races have been shortened from 15 minutes to 12 minutes.

Drivers will still line up for the first heat race via a random draw, and the lineup for the second heat race will still be an invert of the results from the first. The shorter length intends to create a greater sense of urgency with the average finish from both heats now determining the starting lineup for the main event.

The feature has been cut from 100 laps to 50 green flag laps after fans expressed a desire to see a greater sense of urgency from the main event. The race at Stafford also went 20 minutes over its expected time slot. As a result, there was no post-race show or interviews. The race will utilize unlimited green-white-checkered attempts if necessary.

Lastly, driver identification on the race cars will be more prevalent. 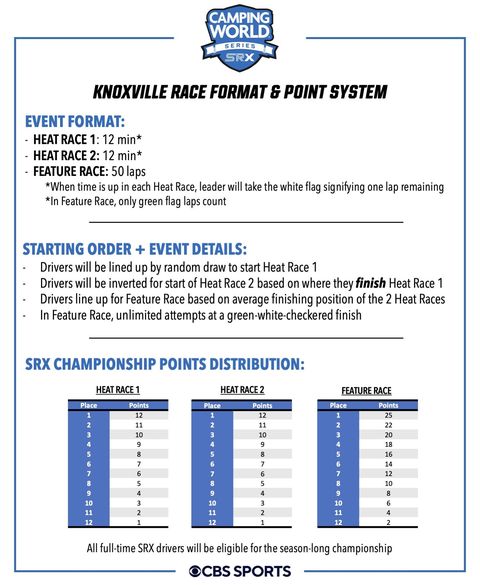 Each drivers’ name will be larger starting this weekend. Also, the full-time contenders will carry the same colors throughout the remaining five weeks of the mini-series. For example, the orange associated with Tony Stewart will remain with the three-time NASCAR Cup Series champion throughout the summer.

“As good as we felt our first race was, there are always things that can be improved,” Evernham said. “I lived by this mantra as a crew chief and team owner and I still live by it today.

“There were things we saw that we immediately knew we could make better for the next Camping World SRX Series race at Knoxville, but we also received real-time feedback from fans. Their insights were spot on and we’ve worked hard to implement them in time for Saturday night.

“The Camping World SRX Series was created for the fans, and our quest to deliver exciting races with engaging personalities will never end. We want Knoxville to be better than Stafford, and when we go to Eldora in two weeks, we want that event to be better than Knoxville. We heard from our fans after Stafford and we’ll continue to listen to make the Camping World SRX Series the best it can be.”

That sentiment was echoed by two-time Knoxville 410 Sprint Car champion Brian Brown, the local ringer set to drive the Rocky Balboa that Doug Coby won in on Saturday.

“I think the changes are great,” Brown said. “This is built around the fans, so if it’s something the fans want and it makes sense, they’re going to make it.

“I was thinking through the strategy of last week, why win heat 1 if that doesn’t pay anything and it only sets you back? … This is going to create more racing so where guys are going to race harder all race. The 50 laps is the right number. 100 laps at Knoxville would have gotten drawn out.

“So I think all the changes are spot on. Tony and Ray are racers and they’re going to do whatever it takes to make it a great time for fans.”

After Saturday night’s race at Knoxville, Superstar Racing Experience will have four more events – June 26 at Eldora Speedway in Rossburg, Ohio, July 3 at Lucas Oil Raceway near Indianapolis, July 10 at Slinger (Wis.) Speedway and then July 17 at Nashville where the inaugural Camping World SRX Series champion will be crowned.

Every event airs at 8 p.m. on CBS and the Paramount+ streaming platform.