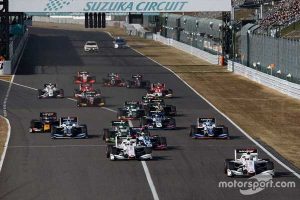 Super Formula has revealed a revised seven-round schedule for the 2021 season, alleviating a clash with the FIA World Endurance Championship.

The Japanese series had revealed a schedule for next season back in August, but the following month the release of the 2021 WEC calendar created a conflict between the 6 Hours of Fuji and Super Formula’s Okayama round on September 25-26.

However, that has now been resolved with the latest version of the Super Formula calendar, which sees the Okayama race pushed back a week to October 2-3.

Additionally, the season finale at Suzuka has been brought forward by two weeks and is now slated to take place on October 30-31, one week before SUPER GT’s season finale.

The remainder of the schedule remains the same as the previous version, with Fuji Speedway – which hosted the final round of the coronavirus-impacted 2020 season last weekend – still set to hold the opening round on April 3-4.