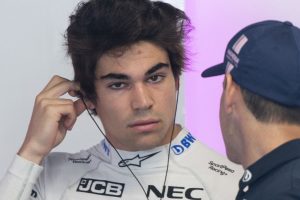 It’s no wonder Racing Point feel Lance Stroll needs a hug after Imola if his post-race interview was anything to go by.

Stroll had a nightmare Sunday afternoon at the Emilia Romagna Grand Prix that culminated in a P13 on the day.

Clashing with Max Verstappen and then Lando Norirs in Portugal, he went into the Imola weekend hoping for better.

Tagging Esteban Ocon on the opening lap, he suffered a broken front wing that necessitated an early pit stop while later, in his second stop of the day, he hit one of his mechanics.

Thankfully the mechanic was unhurt in the collision but Stroll’s feelings clearly were as he trod home in 12th place.

Stroll was anything but happy when he spoke with the media after the race.

Asked by F1TV what he needs to find a bit of luck, he replied: “I don’t know, try next week.”

What can you make of this race? “Cold brakes, shit last two races, move onto the next week.”

Any positives? “Not really, no”

Stroll has not scored a single point since his third place result at the Italian Grand Prix.

Three retirements, a did not start due to illness at the Eifel Grand Prix, and his P13 at Imola are what’s followed his podium.

Andrew Green, Racing Point’s technical director, believes he needs an “arm around him” to help him out of his slump.

“Obviously he’s not where he was, for sure, from Monza to where he is now,” said Green, quoted by Motorsport Week.