Home » Racing » Stefano Domenicali in F1: Who is he and why is he replacing Chase Carey?

Stefano Domenicali in F1: Who is he and why is he replacing Chase Carey? 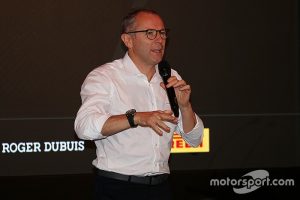 Major change at the top of Formula 1 is incoming as Stefano Domenicali gears up to take over from Chase Carey as the series’ CEO.

Domenicali is set to become only the third CEO of F1 in its 70-year history, following Carey and long-serving chief Bernie Ecclestone, and will take over the reins by the end of the year.

While there has been no official announcement from F1 yet regarding Domenicali’s appointment, plans are afoot for the Italian’s arrival that will surely mark some change for the pinnacle of motorsport.

Who is Stefano Domenicali?

Stefano Domenicali has enjoyed a career in motorsport spanning close to 30 years, working for some of the biggest brands in the automotive industry.

Domenicali was born in May 1965, and was destined for a career in motorsport given he was born in Imola, the town where the Autodromo Enzo e Dino Ferrari circuit that hosted the San Marino Grand Prix is located.

After spending much of his childhood at the track, Domenicali went on to work at both Imola and Mugello before graduating from the University of Bologna and swiftly sending a CV to Ferrari.

Has he worked in Formula 1 before?

Yes, Domenicali enjoyed a long career in F1 with Ferrari, playing a crucial role in one of the most dominant team performances in motorsport history.

Domenicali worked his way up the ranks at Ferrari after initially joining the Italian manufacturer in 1991 in the finance department. He worked in sponsorship liaison and served as head of personnel before becoming the sporting director of Ferrari’s F1 team in 1998.

Domenicali helped redefine the role of sporting director within teams, placing a new focus on human performance that has ramifications felt to this day in F1.

It was an important role to play in Ferrari’s streak of six consecutive constructors’ championships between 1999 and 2004, and Michael Schumacher’s run of five drivers’ titles between 2000 and 2004.

After almost a decade as its sporting chief, Domenicali was the natural choice for Ferrari as its next team principal following Jean Todt’s resignation at the end of the 2007 season.

In 2014, Domenicali resigned as Ferrari’s team principal just three races into the season after a difficult start to the year that saw it slump to fifth place in the constructors’ championship, having struggled to adjust to the new V6 hybrid engine regulations.

What did he do after F1?

Domenicali did not spend long out of the automotive industry following his departure from Ferrari, becoming the president of new business initiatives at Audi in November 2014.

Domenicali then moved across to sister VW Group brand Lamborghini in 2016, becoming the CEO of the Italian manufacturer. He helped lead Lamborghini to huge growth and record sales figures through 2019.

Alongside his role with Lamborghini, Domenicali served as the president of the FIA’s single-seater commission, helping to oversee a restructuring of the junior motorsport ladder.

Domenicali revived the old Formula 2 category, which became the final stepping stone to F1 in 2017, and also established a new international Formula 3 platform in 2019, making the path from karting to F1 much clearer for aspiring racers.

Domenicali remained a popular and welcome figure in the F1 paddock, and occasionally popped up on Channel 4’s UK TV coverage as a pundit.

Why is he taking over from Chase Carey?

News emerged on Tuesday night that Domenicali was poised to take over from Carey, as confirmed to Motorsport.com by senior sources with knowledge of the situation.

Domenicali is yet to agree and complete the deal to become F1’s CEO, but it is considered to be a formality, allowing for preparations to be made for his arrival.

Domenicali has long been on Liberty Media’s radar as a potential leader for F1. His record at Lamborghini proves his ability to help grow a brand, which, combined with his evident knowledge and strength in motorsport, makes him an ideal figure to take over the running of F1.

A variety of other names have been linked to the role in the past, including existing F1 team bosses Toto Wolff, Christian Horner and Zak Brown.

But amid concerns from some teams about conflicts of interest, it was agreed that no figure could take up the role if they had worked for a team in the last two years.

Why is Chase Carey stepping down?

At 66, existing CEO Chase Carey was never expected to spend a large amount of time in the role, with his primary remit being to get the new Concorde Agreement finalised and signed.

With the commercial terms for the next five years being sewn up with the 10 teams last month, Carey can now pass the baton to Domenicali to oversee F1’s future growth and progression.

Carey has achieved a huge amount since taking over from Bernie Ecclestone as CEO in January 2017, when Liberty Media’s takeover of F1 was completed. He has played a role in securing a more sustainable future for F1 via the updated Concorde Agreement and the new regulations on the horizon, including a groundbreaking budget cap.

Carey faced a number of big challenges through 2020 in the wake of the COVID-19 pandemic, but helped secure a 17-race calendar that most thought unlikely earlier this year.

He will remain involved in F1 beyond the end of the year, taking up a revised role when Domenicali becomes CEO ahead of the 2021 season.

How will this change Formula 1?

The greatest change is that F1 will again be run by a ‘racing man’ in Domenicali.

Carey’s track record in business and heading up major brands was deeply impressive, leading to his appointment in 2017, but he did not have the inside-out knowledge of F1 that Domenicali will bring to the table.

Much of the groundwork for the major changes F1 will encounter in the next two years – such as the budget cap in 2021 and the new technical regulations in 2022 – has already been laid. Domenicali will be tasked with overseeing their implementation and policing, as well as looking to continue F1’s future expansion.

The arrival of Domenicali means that three of the key figures from the Ferrari ‘dream team’ from the early 2000s will now hold senior roles at the top of F1. Jean Todt has been FIA president since 2009, while Ross Brawn serves as F1’s managing director of motorsports.

However, Todt’s mandate as FIA president is set to come to an end in December 2021, and he has previously said he will not seek another term – something that is understood to be conditional to Domenicali’s appointment.

It will be left to Domenicali to work with the team already in place at F1 to continue the growth the series has enjoyed in recent years. Given his track record at Lamborghini and previous success at Ferrari, he appears to be a fitting appointment.