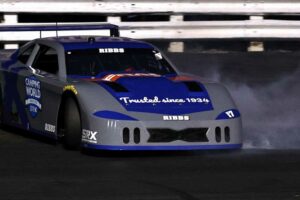 Willy T. Ribbs is a versatile veteran who prides himself on being a keep-it-real and unfiltered racer in the Camping World Superstars Racing Experience Series.

He told Autoweek in a recent Zoom meeting, “I’ve been friends with a lot of boxers in my life from Muhammad Ali to Sugar Ray Leonard to Mike Tyson to Larry Holmes. And they’re the nicest guys on the planet outside of the ring. You wouldn’t think they would hurt a fly. Once they put the gloves on and they step inside that ring, they’re a whole (new person).

“And same for all the drivers in this race,” he said of last Saturday’s six-race Superstar Racing Experience series kickoff at Stafford, Conn.

Ribbs predicted that said they were going to be “yucking it up and ohhh Sweet Caroline and oh, man, ‘We’re so Kum Ba Yah.’ Well, it’s going to be Kum Ba Ass when that flag drops.”

And that instant transformation is something that has struck NHRA Top Fuel dominator Steve Torrence in the past year. Torrence—the current points leader, winner at three of this season’s first six Camping World Drag Racing Series events, and master of the past three series championships—has discovered how powerful that grip can be. It’s at once a ticket to performance success and a catalyst for chaos.

“I’m two different people. I’m a totally different person when I put that helmet on. You are in a whole different world” for those few seconds of a drag race, Torrence said. “You look at a motocross guy or a NASCAR guy or a sprint-car guy—they have multiple laps to fix a mistake. We have to be perfect for three and a half seconds.”

The Capco Contractors Dragster driver said, “I get blasted a lot for the things that I say or the way I act in the heat of a moment. We’re not just in an everyday setting. We’re in a competition where you’re trying to win. You got to be mentally in that zone.

“I look at everyone out here as my friends, but they’re competitors. I want them to do well. But at the end of the day, I didn’t wake up this morning excited to be second. That’s how I lived my life. I don’t even go to work to be second. I don’t—you just don’t. I am not content with [being] just another competitor,” Torrence said.

“Sometimes I think that my passion and drive and will to win comes off off-putting to some people. But more often than not, I’m more upset with myself than anything [if I’m upset], because there’s certain things that you can control and certain things you can’t control but you got to do the best you can,” he said.

Justin Crosslin, the crew member Torrence calls “my conscience,” said that it takes a couple of minutes at the end of the racetrack for a racer to regain composure.

Three-time Funny Car champion Matt Hagan seconded that: “You’re engaging all your senses to really kind of react to a situation. And it takes a little while for them to come down. It’s not a turn-it-on, turn-it-off kind of thing.”

The intensity is palpable for drag racers.

“Kill or be killed,” Crosslin said.

“It’s the same mindset that you get into,” Torrence said. “You look at a soldier that goes to war and you look at a guy that’s sitting over here, waiting. It’s a totally different guy. You’re in battle: kill or be killed, basically, in that car, because the guy next to me or the girl next to me, wants to beat me just as bad. You’re getting in a car to go 330 miles an hour in three seconds. That’s the biggest adrenaline rush I can think of. And so you gear yourself up for that. You’re driving this thing with laser precision.”

Torrence, like any team owner-driver, has the added responsibility of taking care of his employees.

“This is all of these guys’ livelihood,” the co-owner of the family’s pipelining business in East Texas said of his crew. “This is not the way that I make my living. It is the way that a lot of these guys make their living. And so if they don’t perform and they don’t do well, their livelihood depends on it. I have to answer to them when I come back and make a mistake, just as they got to answer to me when they make a mistake. When I go up there and do something stupid, it takes money out of their pocket.”

Likewise, he said, they give him an excellently prepared race car. That’s why he has reached the final round at 47 of his past 84 starts and has won 34 of them for 43 overall victories. But it has raised his expectation level: “When you have the car that I have, you have to step up.

“You got a lot of variables behind that that motivate you, but I drive better when something is eating at me. And whether it’s real or not, in my head it is,” Torrence said.

“Life is just nothing but competition from the day you come out of your mama,” the driver of the DSR Performance Dodge said. “From the day you take your first breath, you’re competing to be alive. You’re fighting out here every day of your life in some way, shape, or form. Nothing out here is free. Nothing is given to you. You either earn it or someone else has had to earn it to put you in a place to be there.”

Hagan, too, summoned the comparison between racers and gladiators, calling elite-level drag racing “almost an old-school gladiator kind of feel. It’s the last of , like, what we do, of our primal instincts, to just be adrenaline-filled. That’s why people used to come and watch people fight tigers in an arena. It’s a show. You’re a showman, but you’re also putting your life on the line to do what we do.

“It’s something that you have to have respect with. You have to understand that it can hurt you in a blink of an eye, but you can’t fear it, either. You have to crawl in there with the intention of ‘I’m going to do whatever it takes to put this race car in the winners circle – however many times it blows up on me or however many times I got to eat parts and fire and everything else.’ That’s just a mentality that you have to have to be a champion,” he said.

Sometimes the internal struggle is misunderstood, and trying to define it for people who don’t live it is like walking a tightrope.

“It’s not that I’ve figured anything out,” Torrence said, “but I’ve gotten a lot better handle on that than I’ve had in the past. I’ve dug myself a hole with a lot of people. You only get one chance to make a first impression, and I screwed that up with a lot of folks. So you just go out and you put your best foot forward and try to change people’s perceptions. That’s what I really worked on for the last couple of seasons: not so much wearing my heart on my sleeve and trying to control my emotions better in a competition situation.”

But it’s a vicious cycle – racers accept the fact they’re competing with themselves about how to compete with others.

And the beat will go on July 24-26 at the Summit Equipment NHRA Nationals at Norwalk, Ohio.