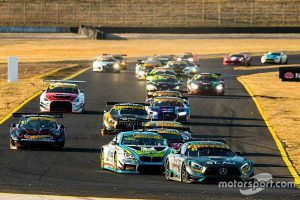 As first revealed by Motorsport.com, SRO has been awarded the Commercial Rights Agreement for top-level GT racing by governing body Motorsport Australia.

AGT, which also incorporates the Australian Endurance Championship, will be run as part of a joint deal between SRO and local TCR promoter the Australian Racing Group.

While not yet confirmed, it’s understood the category will be re-branded as GT World Challenge Australia, to bring it in line with other SRO-run GT series around the globe.

“We are honoured that Motorsport Australia has given us the opportunity to bring our experience of GT racing to its shores in 2021,” said SRO boded Stephane Ratel.

“SRO already has strong ties to the Australian GT scene through our partnership with the Liqui-Moly Bathurst 12 Hour, which has been part of the Intercontinental GT Challenge Powered by Pirelli since its formation.

“We are excited to join forces with [ARG CEO] Matt Braid and the Australian Racing Group to grow the Motorsport Australia GT Championship further, providing a global audience and BoP management at the same level as the series directly managed by SRO.

“The 2021 season promises to be very exciting indeed and we will release more news concerning our plans shortly.”

Motorsport Australia CEO Eugene Arocca added: “Both SRO Motorsports Group and the Australian Racing Group have extensive experience in managing world class categories and we are absolutely thrilled to announce them as joint Commercial Rights Agreement holders for GT racing in Australia.

“There is certainly a passionate competitor base and many teams who are keen to get racing in 2021 and we can’t wait to be part of that.

“We’d also like to thank all those who expressed their interest as part of this process, including previous category managers, Trofeo Motorsport.”

The tie-up with ARG suggest Australian GT could feature heavily on the Shannons Motorsport Australia Championships bill, alongside other ARG series like TCR Australia and S5000.

SRO does also have an existing working relationship with Supercars through the Bathurst 12 Hour.