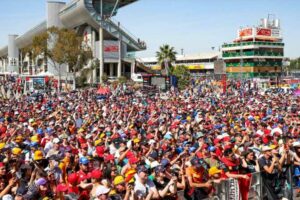 The spectator experience at the Montmelo circuit, 16 miles outside the city, has been heavily criticised amid stiflingly hot temperatures even for this time of year.

At an event that was sold out for Sunday after two years when the attendance was severely restricted by the pandemic, the main complaints were queues – for transport, access into and out of the venue at either end of the day and toilet facilities – and a lack of available refreshment, including basics such as bottles of water.

Stefano Domenicali, the Formula 1 CEO, has already made his feelings about the situation clear, with a statement from the sport’s organisers saying: “The huge number of fans at this event, both inside and outside the circuit, created traffic issues for the fans.

“We have made the promoter aware this is not acceptable and must be fixed for next season.”

Now, as reported by grandpx.news, Santamaria, who is the circuit’s CEO, has apologised for the problems, admitting the number of fans turning up to watch their Spanish heroes Fernando Alonso and Carlos Sainz in particular had been “well above normal”.

“It is inevitable there will be some chaos when a sporting event mobilises so many people.

“But I put myself in the shoes of the fans who suffered these problems and I apologise.”

In his Race Notebook on Sky F1, Ted Kravitz alluded to the difficulties spectators had experienced.

“They haven’t quite got it right for the fans,” said Kravitz. “We’ve heard some absolute horror stories about the facilities here and making people, after qualifying, check out with their tickets through a gate. That caused huge bottlenecks, delays and people trying to get on coaches back to Barcelona. Apparently, in the baking heat, it’s been really, really bad.

“There are two reasons for this. Firstly, they haven’t been used to the number of people we’ve had here, especially in the last few years. The facilities are not up to it.

“Secondly, they have been found wanting with the organisation. I think they have tried their best, but the conditions haven’t helped.

“In this heat, it’s horrible to hear people were passing out and there was no water and everything like that.”