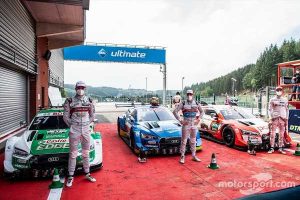 Robin Frijns claimed the first pole position of the 2020 DTM season at the Spa-Francorchamps circuit on Saturday, as Audi dominated qualifying to lock out the top four spots on the grid.

Nico Muller was the quickest driver after the first runs in the 20-minute session, his time of 2m06.353s putting him ahead of Audi stablemates Loic Duval and Rene Rast.

As the second set of runs began, Rast became the first driver to break the 2m06s barrier, taking over the top spot on the timesheets with a 2m05.889s flyer.

Muller fought back with a time of 2m05.743s to snatch provisional pole again, only for Abt teammate Frijns to beat him seconds later with a 2m05.625s.

Frijns lap time remained unbeaten in the session, granting him the first pole position of the year by 0.118s.

Rast had to settle for third behind Muller, with Mike Rockenfeller qualifying another tenth adrift to complete an all-Audi top four.

Sheldon van der Linde led the charge for BMW in fifth, 0.617s off the pace of Frijns, with BMW stablemate Timo Glock just behind in sixth.

Audi driver Duval failed to improve his laptime in the second part of qualifying and ended up seventh, ahead of two-time DTM champion Marco Wittmann (BMW) in eighth.

Lucas Auer was ninth fastest on his return to the DTM with BMW, while the top 10 was completed by Philipp Eng (BMW).

Jamie Green endured a disappointing session as he qualified slowest of the factory Audis, more than a second off the pace in 11th, ahead of the lead WRT-run customer Audi of Fabio Scherer and BMW’s Jonathan Aberdein.

Robert Kubica impressed with the fourth-fastest time during a wet practice earlier on Saturday, but could qualify no higher than 14th as the track dried out in time for qualifying.