Some Unusual Facts From The Bonkers Italian Grand Prix 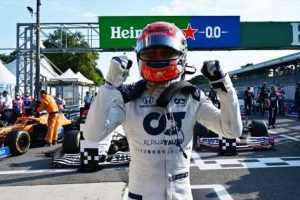 I’m not the superstitious type, but it’s hard not to look at the accidental display of a graphic proclaiming Lewis Hamilton’s ‘90th win’ after qualifying at the Italian Grand Prix as a bit of a jinx. We certainly seemed on course for the Mercedes driver to add to his already impressive tally of victories, as he pulled out a 12-second lead on second-placed Carlos Sainz Jr in the early stages of the race.

However, the stricken car of Kevin Magnussen turned the race on its head. It caused a safety car and a pitlane closure (since this was the only way for marshals to safely recover the Haas), and with Hamilton entering the pits before it was reopened, the Brit was handed a 10-second stop/go penalty.

Hamilton took his penalty after the race restarted a second time following a 25-minute red flag period triggered by a huge crash for Charles Leclerc, leaving Alpha Tauri’s Pierre Gasly – who’d started way down in 10th – leading the race until the chequered flag. Don’t forget, this is the guy Red Bull Racing felt it needed to demote to the junior team halfway through the 2019 season.

It’s the first time a Frenchman has won a Grand Prix for 24 years – for the last occurrence, you have to go all the way back to Oliver Panis’ equally unlikely win in a Ligier at the 1996 Monaco. But that’s far from the only odd fact from this brilliantly bonkers race.

It was also the first race since Hungary 2012 to feature a podium sans Mercedes, Red Bull or Ferrari, and the first time since Kimi Raikkonen’s win for Lotus at the 2013 Australian GP that the victor wasn’t in a car from the ‘big three’. The top three drivers in Italy were also, as it happens, all celebrating their second podium finishes.

Gasly became the 10th driver to win an F1 GP starting from 10th. The last driver to manage it was Daniel Ricciardo at the Azerbaijan GP in 2017, which was the last F1 race to feature a red flag.

The result was Alpha Tauri’s first win since 2008 (as Scuderia Torro Rosso), which was also at the Italian Grand Prix. The driver was a certain young whippersnapper called Sebastian Vettel, who had a decidedly less rosy time at Monza this year. He retired with brake issues early in the race which – together with Leclerc’s crash – gave Ferrari its first double DNF at the Italian GP since 1995, a day on from failing to qualify either car in the top 10 at its home race for the first time since 1984.

At least the Tifosi weren’t actually present at the track this year, not that this is not much of a consolation. The miserable result means Ferrari has gone two races without scoring a single point – the last time that happened was 2009.