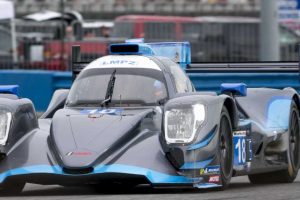 It’s easy to think of IMSA’s Le Mans Prototype 2 class as something of a stepchild, racing only twice this year for points, at Road America and Sebring, but nonetheless putting on a good show, as they did in the Rolex 24, which did not count towards the point total.

And just as LMP2 began to grow under new rules, along comes COVID-19 and its associated financial implications, which are hard on a class that is mostly funded by non-professional drivers and whatever sponsor help they can come up with.

The LMP2 cars all Oreca 7s with a 4.2-liter Gibson V-8 engine, same as the P2 cars which run in the FIA World Endurance Championship, which sanctions the upcoming 24 Hours of Le Mans. That’s a problem in an economic slump—every other class has cars associated with a manufacturer, like Cadillac, Chevrolet, Mazda or Porsche, which can logically be expected to help out with expenses in some classes to help beat the other manufacturers, but there are no other manufacturers in LMP2. And since you can’t easily buy the British-built Gibson engine, there’s no incentive there to help fund the class to sell their V-8s.

The LMP2 cars used to run directly against IMSA’s DPi class, but the sanctioning body slowed them down a bit and created a class for them, which emphasizes the use of less-experienced Bronze-rated drivers, typically paired with a pro driver.

Points don’t mean much with so few races completed for LMP2, but Cameron Cassels leads with 64 points, followed by Patrick Kelly with 63. Cassels drives the Performance Tech No. 38, with Kelly racing in the No. 52 PR1 Mathiasen entry.

The LMP2 series could get more interesting this weekend as veteran Colin Braun—a “veteran” at 31, because he has been racing in IMSA since 2005, when he was 16, joins the ERA Racing team. He has also spent time in NASCAR’s Xfinity and Gander Outdoors truck series, as well as ARCA and the Red Bull Global Rallycross series.

He’s driven a little bit of everything, but told Autoweek that he likes the LMP2 cars for multiple reasons—they’re fast, have a lot of downforce, “And we don’t have to worry about BOP.”

BOP is Balance of Performance, which IMSA uses to level the playing field with the various makes of cars, adding or subtracting weight, increasing or decreasing fuel capacity, or other methods. It can be infuriating and is a constant source of carping, but since all the LMP2 cars are the same, there’s no BOP – let the best man or woman win.

Braun has won championships, as well as three class victories in the Rolex 24 and a second in class at the 24 Hours of Le Mans, so he knows his way around racetracks.

He has been coaching the team, helping gentlemen racers (Bronze-rated) Kyle Tilley and (Silver-rated) Dwight Merriman, and with the need for a third driver for the six-hour race, the Gold-rated Braun is putting his helmet back on to compete. The Orecas are “phenomenal to drive,” he said, and can be pretty forgiving for less experienced drivers. “It’s one of the most user-friendly cars I’ve driven.

“The potential for LMP2 to grow in IMSA pre-COVID was really big,” and that has “hurt the sport of racing in general, and the LMP2 class as well,” as none of the cars are funded by manufacturers, which is an opportunity for the other three classes, which race cars affiliated with a car company. “It’s a fast, cool car to drive, and the budgets are reasonable—if you look at all the WeatherTech classes, LMP2 is a big bang for the buck. I’m honestly surprised there are even more of them jumping in to try it.”

In Europe, a new Oreca must not exceed the price of 483,000 Euros, which is about $579,000, and that is without engine or electronics. But there are plenty of used P2 cars out there, too. And with no BOP, “You go out there, you drive as hard as you can and if you get beat, you just have to come back and do a better job next time. There’s nothing to hide behind.” The cars and engines are very reliable, so once you have the package, you hire a guy like Braun to dial it in, then go out and have fun.

There are only two LMP2 cars entered this weekend, out of a total entry of 28. All the classes are hurting due to COVID and its economic impact, but as the disease subsides, more entries are expected in all classes, including LMP2.

For Braun, there’s an added emphasis on the race at Road Atlanta: “It’s one of the few IMSA tracks that I haven’t won on,” he said. “I’d love to get that done this weekend.”