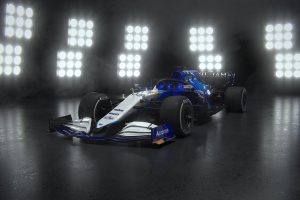 Williams team principal Simon Roberts says the FW43B has been the easiest car to build of his Formula 1 career.

Williams’ 2021 challenger, the FW43B, references in its name the fact that large parts of the 2020 chassis have been carried over to 2021 for all teams, an emergency measure put in place due to the financial impacts of the global pandemic.

But Roberts said the fact his team have not had to design a new car means they have actually been able to make a lot of changes on top of the ones enforced by the new aero regulations.

That said, it was the easiest build he has ever overseen in Formula 1.

“Everyone has been hit hard by the regulation changes to the floor and the rear brake ducts and it’s just a race now to see how much you can recover,” he told the Formula 1 website.

“There has also been a really big refresh on tidying up all aspects of the car. We haven’t had to design and build a whole new car so we’ve been able to focus on all the other areas in a bit more detail than last year.

“Under the skin, the car is a big change. I’m so proud of what the guys and girls have done and it’s been a nice, easy build – the easiest I’ve ever done in F1.

“Normally you’re on the ragged edge of not having all the parts or being strung out for some issues but it’s gone really well – a testament to all the hard work and effort that everyone’s put into it.”

A long-term engine customer of Mercedes, it was always the desire of the Williams family to avoid any closer partnerships and become a so-called ‘B team’ in Formula 1, and initially after the team was sold to Dorilton Capital the stance remained the same.

But at the start of the year, Williams announced they would strengthen their technical partnership with Mercedes for 2022 with the new generation of Formula 1 cars arriving that year.

And Roberts said already the stronger ties with Mercedes are proving “very helpful”, allowing Williams to focus their efforts on other areas of the car.

“The partnership with Mercedes is really helpful going forward and is a shift of some of the areas we normally work on here, but it means we can work on the rest of the car,” he added.

"We don't forget our history, our heritage, but we are moving on to a bright future." pic.twitter.com/3rzXdLiSir

As well as the Mercedes link, Roberts revealed that Dorilton have also been investing heavily to boost Williams’ ageing equipment.

“There was a lot of investment towards the back end of last year on machines and different pieces of equipment with a huge amount of support from Dorilton, which we really appreciate,” he explained.

“That won’t suddenly transform what we do [this year] because a lot of that stuff was only delivered at the back end of December, but it all makes a difference.

“It means we don’t have the breakdowns we used to because we’ve been able to replace old, ageing kit and speed up some of the processes a little bit. Nothing revolutionary but all stuff that just helps everyone do a better job and gives people confidence to push hard.”