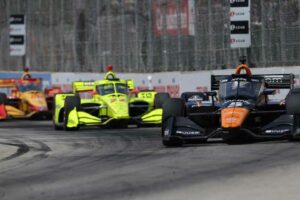 In a sense, Pato O’Ward made duck pate of Josef Newgarden in Sunday’s back half of the two-race Chevrolet Detroit Grand Prix weekend doubleheader at Belle Isle. 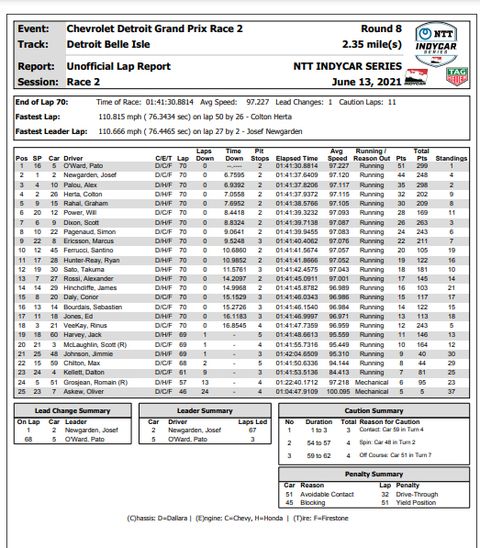 Starting from the pole, Newgarden led the first 67 laps in the 70-lap event in commanding fashion. But with his tires going away, Newgarden became a sitting duck as O’Ward passed him and set sail for the final three laps en route to his second win of the season, becoming the first multi-race winner in 2021.

“I had such a great car all weekend,” O’Ward told NBC Sports. “This is a Team Chevy territory. I’m so excited and so pumped to get this for them.”

Shortly after crossing the finish line, O’Ward came on the team radio and dedicated the win to Arrow McLaren SP teammate Felix Rosenqvist, who was involved in a frightening single-car wreck in Saturday’s race.

“I talked to Felix this morning, the important thing is that he’s OK. I told him I’m going to win it for you. I told him I was going to get it done. I like to be a man of my word so I got it done.”

When asked if he could believe he was the points leader, O’Ward smiled and told NBC, “Yes I can. The guys have been doing a great job. They all deserve this. There’s still so much to go, we just need to stay on it and continue pushing.”

And pushing is something O’Ward likes to do, rather than being pushed around.

“The problem is whenever you let people step around over you, then it becomes a habit,” O’Ward said in his post-race press conference. “People know that I’m not here to be fifth or sixth. They know I’m here to win. I’m pretty sure that’s the message that we portrayed today.”

With the win, O’Ward. who started from the 16th position in Sunday’s race after a mishap in qualifying, takes over as the series’ point leader, holding a one-point edge over previous standings leader Alex Palou, who finished third in Sunday’s race, earning his series-leading fourth podium finish in the first eight races.

“We’re still there in the mix and happy with another podium,” Palou told NBC. “It’s only one point. We have Road America and Mid-Ohio coming up (next), so looking forward to both of those.”

After celebrating with champagne, O’Ward and his team took the traditional dip by the winner into the Belle Isle fountain.

“Oh, my God, water has never felt so good,” O’Ward said with a laugh. “It was like perfectly chilled.”

Newgarden, meanwhile, was forced to settle for his second runner-up finish this season. Both he and his Team Penske teammates are seeking their first win of 2021. It’s hard to believe Team Penske still hasn’t reached victory lane yet.

“Sad, pretty sad,” Newgarden told NBC when asked how he was feeling after having what appeared to be a commanding lead that he wouldn’t wind up yielding. “It’s hard not to be disappointed. We had the car to beat. Just the cautions killed us. Our rears (tires) were shot. It is what it is. We tried. We went for what we went for. I don’t want to second-guess it.

“Just disappointed. We really wanted to win and thought we had the car to do it. (O’Ward) was coming like a freight train, what are you going to do? There just wasn’t much I could do. … It just didn’t work our way.”

Later, in his post-race interview with the media, Newgarden assessed how the first half of his season has gone. When asked what is it going to take for him and Team Penske to finally reach victory lane, Newgarden didn’t hold back.

“If I had the answer, I’d be doing it but I’m sure it’ll happen at some point, it just hasn’t aligned,” he said. “Sometimes you get that, you just don’t get everything to line up perfectly. I think we’ve got a lot of the ingredients right. I don’t think we really need to change much, just keep doing our thing.

“I wouldn’t change a thing. Look, you can’t predict these races. You can look like a hero or a zero pretty easily in this sport, so yeah, I wouldn’t ask anyone to change anything. I think they’re doing all the right stuff, it’s just not worked out.”

Team Chevy not only earned the win, it also placed four drivers overall in the top 10, the other six driving Honda-powered cars.

Here’s how the top-15 points stack up after Sunday’s race:

Hard as it may seem to believe, we’re already halfway through the 16-race NTT IndyCar Series season (unless IndyCar officials add another race to replace Toronto, which was deleted from the schedule last week due to ongoing problems caused by COVID-19 in Canada).

And as we begin the second half of the season next Sunday at Road America, several full-time series drivers are in jeopardy of being too far out to rally back in the remaining eight (or nine) events.

• Good news: Rosenqvist, who was taken to a local hospital on a stretcher after a frightening head-on crash with a wall in Saturday’s race, was released just before Sunday’s race. Rosenqvist did not come back to the track after he was released, but did send out these tweets:

What a race guys, congratulations @PatricioOWard ! What a restart 😍💪🏻💪🏻💪🏻 https://t.co/HhrEypkht7

• Oliver Askew made his first appearance in an IndyCar race this season, filling in for Rosenqvist. He logged 46 laps before the team decided to retire the car, leaving Askew to finish last in the field.

• Will Power rebounded from his disappointing finish in Saturday’s race to wind up seventh Sunday, putting three of the four Team Penske drivers in the top 8 (Newgarden second, Simon Pagenaud 8th). Rookie Scott McLaughlin had a rough go of it and finished 20th.

• Jimmie Johnson brought out the yellow caution flag when he spun in Turn 1 on Lap 54. While he stalled the engine, there was good news: he didn’t make contact with any walls. Johnson finished 21st in the 25-driver field.

• If this whole racing thing doesn’t work out, Romain Grosjean may have a future as a firefighter. His car spun on Lap 57 and while he stopped safely, both front brakes caught fire. Grosjean hopped out of the car, went to a nearby course marshal’s area and had them give him a fire extinguisher. He managed to put the fire out on the right front brakes, while the AMR safety team was quickly on-scene and put out the left front brake fire.

• The series moves on to the challenging four-mile road course at Road America in Elkhart Lake, Wisconsin, next Sunday, and then the July 4 race at Mid-Ohio.