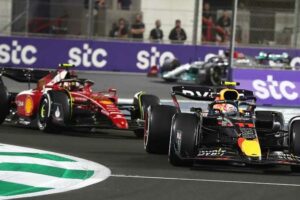 It was a day of misfortune for Perez having initially earned pole position and looking to be cruising to a third win of his F1 career before an ill-timed pit-stop scuppered his chances.

Charles Leclerc and Ferrari appeared to bluff Perez and Red Bull perfectly after stating they would ‘pit’, only to stay out. Perez, meanwhile, did stop but was given no chance to gain advantage from his fresh tyres after a crash from Nicholas Latifi brought out the Safety Car.

As the other drivers stopped for fresh tyres, Perez’s luck only got worse when he was adjudged to have been behind Carlos Sainz at the Safety Car line as the Ferrari driver exited the pits.

Perez kept third place as Sainz and Ferrari protested to the stewards, but a new Race Control directive for the 2022 season dictates the teams will not be instructed to give the place back. Instead,  teams are being asked to self-govern or face a penalty.

As a result, Perez did not immediately give the place back and Jolyon Palmer believes that was tactical from Red Bull in order to give Max Verstappen some protection.

Sometimes luck is not on your side, but there’s plenty of positive things from the weekend.

Congrats to @Max33Verstappen on his first win of the season; great team result!

“Eventually, Perez relinquished the position just after the restart, but it looked to me like a tactical play from Red Bull to not give the position back to Sainz sooner, which they should have done, having technically overtaken him under the Safety Car,” Palmer wrote in his F1 column.

“Red Bull keeping Perez in third meant he could act as a perfect rear gunner to Verstappen at the restart and ensure Sainz could not pressure the Dutchman for second, exactly as he had done a week earlier at the Bahrain Grand Prix restart.

“All in all, it meant the top two were able to get a slight advantage over the Perez/Sainz duo, and from there they stretched their legs and made it a two-horse race for the lead.”

That led to a shootout for the lead late on between Verstappen and Leclerc, and Palmer believes it could have been Leclerc in Perez’s position had he pitted when he said he would.

“When you think back to Perez and where he ended up, that could have easily been Leclerc had Red Bull not called in the race leader all of those laps before.

“If Leclerc hadn’t seen Perez pit, he may well have dived in himself in an undercut attempt and ended up inadvertently ruling himself out of contention – falling down to fourth, with Red Bull then leading a one-two at that point.”