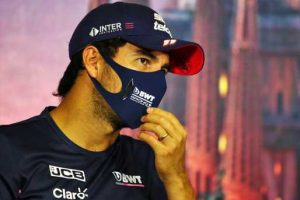 Sergio Perez has hit out at “bull****” and “disrespectful” reports that he visited sponsors when he returned to Mexico after the Hungarian GP.

Perez was forced to miss both Silverstone races – the British Grand Prix and the 70th Anniversary Grand Prix – after testing positive.

Instead of racing his RP20, Perez self-isolated for almost two weeks before recording a negative test earlier this week.

He will be back in the car for this weekend’s Spanish Grand Prix.

“The FIA have confirmed that Checo can return to the F1 paddock and he will compete for the team in this weekend’s Spanish Grand Prix.”

Following his first positive test in the build up to the British GP, Perez revealed that he had returned to Mexico to visit his mother who had been in a “bad accident”.

He insisted that he followed all the protocols laid out by the FIA and Racing Point and didn’t not know how he had picked up the virus.

Soon after, though, reports emerged claiming that he had been taking selfies with people while also meeting with his sponsors in a bid to save his Racing Point drive.

Perez says that is bull.

“It’s a total lie,” he told F1 in the build up to the Barcelona weekend.

“I went to Mexico for two days to see my Mum, with all the precautions in place. I took care of everything. I followed all the guidelines.

“When I was in quarantine, I saw everything. I saw people saying I was taking selfies with a lot of people, and I made up the story about my Mum.

“So much bullshit, and so disrespectful.”

The Mexican driver added that anyone can test positive and people should rather wish that person a speedy recovery than make up stories about them.

“So many people here in Formula 1 tend to think we are bulletproof to the virus, and that is not the case,” he continued.

“We are all very vulnerable to this, We have to take care of it.

“I have done nothing differently to anyone in this paddock, I took all the precautions, and it just happened to me.

“It happened to another friend in another team while I was in quarantine, he said: ‘Look, I tested positive too’. It can just happen to anyone.

“But what kind of happened, if tomorrow there is someone else infected, people just make up stories instead of being worried about their health.”