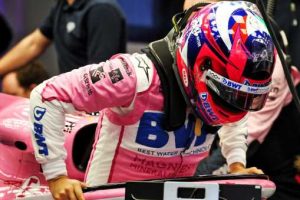 The team, soon to be known as Aston Martin, confirmed just before the Tuscan Grand Prix that Sebastian Vettel would be joining them for next season at beyond.

As was expected considering that Lance Stroll is the son of team owner Lawrence, Perez will be the one to make way.

At the time of the announcement, the Mexican driver stated that the decision was painful for him given everything he’d done for the team.

“It hurts a bit as I bet on the team during very rough times; we managed to overcome obstacles and I am very proud of saving the jobs of several of my teammates,” he said in a statement.

“I’ll keep the memories of the great moments lived together, the friendships and the satisfaction of always giving my all.

“I will always be grateful for the opportunity given to me by Vijay Mallya, who believed in me in 2014 and allowed me to continue my F1 career with Force India.

“To the current administration, led by Lawrence Stroll, I wish nothing but the best in the future, especially with the upcoming Aston Martin project.”

2020 has been a strong year for Racing Point, with the controversial RP20 being the team’s best car in a long time.

Checo has now stated that the fact that he’s being forced out only hurts more given that the 2021 challenger is looking like it will be even stronger.

“I know I’m leaving a great car that is looking great for next year. Definitely the team will be stronger next year than this year,” he said as per motorsportweek.com.

“In that regard, it hurts a bit more that you know you’re leaving a good car. But you never know in the future, things in Formula 1 change so quickly.

“Let’s see what the future holds for the world, for both of us.”

At the halfway point of the season, Perez is currently sat in P9 in the Driver’s Championship with 44 points to his name having missed two races due to contracting COVID-19. His team-mate Stroll is three places and 13 points ahead of him.