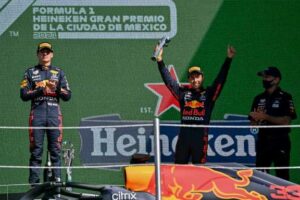 Christian Horner has praised how Sergio Perez is responding to his role at Red Bull in a variety of ways.

Not only is the Mexican now delivering on track consistently, he also contributes to the most convivial atmosphere in the team principal’s recollection.

Although Perez won the Azerbaijan Grand Prix after his team-mate Max Verstappen had crashed due to a tyre blowout while firmly in command, the results in his first 15 races with Red Bull were decidedly mixed.

But since Turkey, the penny appears to have well and truly dropped and a string of three consecutive third-placed finishes have provided solid back-up to Verstappen and brought Red Bull to within one point of Mercedes in the Constructors’ World Championship standings.

At his home race in Mexico, it could have been even better for the 31-year-old but he came up just short of catching and passing Lewis Hamilton for second position.

That would have been the icing on the cake for Red Bull with Verstappen moving 19 points clear in the Drivers’ title standings in any case – but nevertheless, Horner has no complaints about what Perez is producing now he has developed more confidence in his car.

“I think we had great pace on Sunday, you could see with ‘Checo’ he was getting so close in the last few laps, but he drove a great race,” the team principal told Sky F1.

“They were coming up to a bit of traffic, Lewis ‘boxed’ to make sure he retained track position, but then we gave ‘Checo’ around 10 laps-better tyres and he really made that work at the end of the race, so a great race for him.

“He has found his form in the last three or four races and that’s just presenting us with so many more options.

“He’s totally in tune with that, he’s asking all the questions from the car as well, and I have to say it’s probably one of the best, if not the best, team spirit we’ve ever had in this team.”

Red Bull are odds-on favourites to win again through Verstappen at the next race in Brazil, but Horner is refusing to get too confident about the prospect of titles with four grands prix remaining.

“Look, there’s still a long way to go, still a lot of points available, and we’ve just got to keep doing what we are doing, keep attacking, keep pushing and maximise every weekend,” he said.