Sergio Perez in rehab after injuring his neck in qualy crash 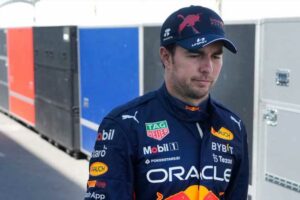 Crashing in qualifying for the Canadian Grand Prix, Sergio Perez suffered a contracture that means he is having to do rehab on his neck before the next race at Silverstone.

Perez crashed in a wet qualifying session at the Circuit Gilles Villeneuve, the Red Bull driver spearing nose first into the barrier.

He was back in the car for the grand prix, the driver unaware that he had injured his neck in the crash.

He’s now doing rehab to ensure his body is ready for the next race, the British Grand Prix.

“The start of the week is always hard after such a bad day but I’m fine, recovering from my neck because I have a strong contracture after the crash, which I didn’t feel,” he told FoxSports.com.mx.

“It hurt a lot but in general, everything was fine.

“Each race is different, right now I am preparing for the strong contracture I had in my neck and I can’t exercise, I am in pure neck therapy to be 100 percent at Silverstone.

“Each race works differently because your body is in a different state all the time, there are times that you have to push more cardio, strength or resistance. So you always work different things, in (weeks) ‘back to back’ it’s very regenerative recovery what it does.”

The Mexican driver will be back in action on July 1st in Friday’s practice for the British Grand Prix.

He’s hoping for a better race weekend after his Montreal outing ended just nine laps in the 70-lap race when his RB18 suffered its second DNF of the season.

“It was the gearbox,” he said, “in fact it was already in its last race, it was very close to the limit and unfortunately it failed.

“They are things that are difficult to prevent, more so on a track like Canada where there are many bumps, we are checking on Friday if it did not have a problem.

While Perez retired from the race, his team-mate Max Verstappen took the win to pull 46 points clear in the race for the World title.

Perez added: “It is important to solve these issues that are always different for us, each reliability issue has been different during the year, so we have to continue working.