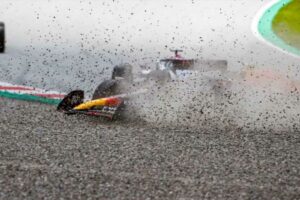 Red Bull’s Helmut Marko was disappointed to see Sergio Perez take the outside line at Turn 4 in Austria – as he had told him not to.

The end result was sadly a familiar one for Red Bull as Perez ended up in the gravel after battling with a Mercedes.

Perez started the Austrian Grand Prix from P5, a place behind George Russell, and as Perez took the outside line at Turn 4 in a bid to overtake, Russell spun Perez into the gravel.

That resulted in a five-second penalty for Russell, branded “harsh” by Mercedes, and although Perez got going again, the damage inflicted upon the Red Bull RB18 ultimately led to his retirement after lapping at the rear of the pack.

With that incident proving almost a carbon copy of the one between Lewis Hamilton and Alex Albon at the Red Bull Ring in 2020, Marko had used that experience to warn Perez against taking the outside line at that corner.

Sadly, Perez did not follow the advice, and the result quickly became clear.

“We said before the start ‘do not go around the outside in that corner, that is not possible’,” Marko told Sky Sports Germany, quoted by RacingNews365.com. “This was just unnecessary. We’ve seen that before. It doesn’t work.

“After that, the car was damaged and it made no sense to continue driving. There was a lot of damage to the floor. He might have finished two laps behind, so it didn’t make sense [to continue]. It was better to save the mileage.”

Speaking to Sky Sports F1 post-race, Red Bull team principal Christian Horner quipped “I don’t think Mercedes like our cars going around the outside at Turn 4” – a line Marko repeated in his conversation with Sky Germany.

“It was a shame because you saw Checo was ahead [of Russell],” Marko added.

“It’s almost a perfect imitation of the incident with Lewis and Albon a few years ago. It’s a shame we didn’t get more space there.”

The race was not a complete disaster for Red Bull, Max Verstappen having claimed a P2 finish on a Sunday when Ferrari were clearly the faster team.

As Charles Leclerc set about romping to victory, Carlos Sainz was sizing up Verstappen to make it a Ferrari one-two, until his engine blew.

Leclerc then had to contend with a throttle issue for the closing stages and although Verstappen closed the gap, Leclerc held on to claim his first win since the Australian GP in April.