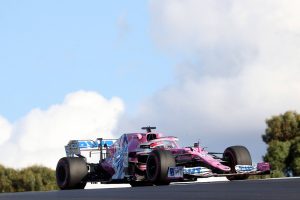 Sergio Perez has received only a reprimand after he got in the way of Pierre Gasly during qualifying for the Portuguese GP.

The Racing Point driver was on a cool down lap and moved to the left of the track when warned that Gasly was approaching, but the hilly nature of the Algarve International Circuit between turn 10 and turn 13 meant Perez actually obstructed an unsighted Gasly.

Fortunately, it’s the terrain which saved Perez from anything further than a formal reprimand.

“Perez had just aborted his lap at turn 10, although he was still traveling at relatively high speed,” the stewards explained, as quoted by RaceFans.net.

“The topography between turn 10 and turn 13 is very hilly, and the drivers have very limited vision of the cars behind them. Further, the time between the turns is very limited.

“At the apex of turn 13 Perez’s team [sent] a radio warning to him that Gasly was approaching at full speed. He immediately pulled to the left at the exit of the corner. However, at this point the fact that he was at the apex as Gasly approached definitely impeded Gasly.

“The stewards considered the difficulty to see that was apparent at this circuit, and compared this incident to others during the season. The stewards therefore felt that this fell on the very edge of being ‘unnecessary impeding’ (as is stated in the regulation) and issued a reprimand.”

This means Perez retained his P5 spot on the grid for the Portuguese Grand Prix, and the Mexican was delighted with how his team had turned the situation around after struggling during free practice to find the right setup for the RP20.

“In those difficult conditions today it was good,” he is quoted by Crash.net.

“A good performance by the team. Yesterday we were so lost, we changed the car upside down – the tyre preparation and everything. I think we’ve done a pretty good job to come back, being there. It’s a nice position to start the race.”

Perez thinks the key in Sunday’s race as Racing Point look to oust their rivals in an extremely tight midfield pack, will be to stop the tyres from overheating.

“Well, I think outside of the Mercedes and the Red Bull, we are all very together, very much in that mix,” he said.

“As we saw in Nurburgring, we have to be there, to maximise the performance tomorrow, do a good strategy. I think most of the people don’t have information on the long runs so we don’t know what to expect with these tyres, this track. Still, a lot to play for.

“I think it’s going to be a race of people probably getting the tyres too hot early on and having to pit probably because I expect a lot of the guys have been aggressive with the re-heating levels, the preparation of the tyres.”