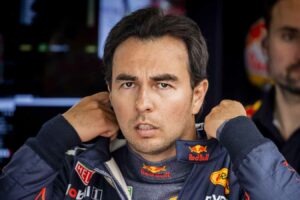 Sergio Perez admitted his car felt “miles off” the pace on a tricky day during free practice for the British Grand Prix at Silverstone.

FP1 was partially ‘rained off’ after a flurry of showers discouraged the teams from completing flying laps, particularly those with significant upgrades on their cars, which meant FP2 was a case of trying to make up for the lack of early running – leaving less time to perfect their car set-up.

Perez was unable to make the most of his practice session after saying the simulator work he had completed with Red Bull before the weekend did not match up to the performance he found in Friday’s running.

He added the team have got something of a mystery they need to solve as a result, to get themselves back on form.

“It wasn’t a great session today,” Perez told the media after qualifying.

“I think from our preparation we had and [in the] simulator, the car is miles off – so we assume there is something going on that we need to understand.

“It was a very, very short long run there at the end. So not a great start. We are a bit on the back foot, so we just have to understand what’s going on with it.”

With the time spent having to find a solution to his issues, Perez admitted getting back on track will be a tough task – but he is feeling confident he will be okay in the end if he has the confidence to push his RB18.

“It will be pretty difficult [to recover] but we’ve done it before and I think as long as we are able to get things in the right place, you need the confidence around these fast corners,” he said. “As long as I’m able to get back my confidence, I think things should be all right.”

Perez could not seem to get close to Verstappen throughout the session, his quickest effort a whole six tenths behind his team-mate, but he believes he and the team know where he was losing time to his colleague.

“We have [an idea], I think. There are some [suspicions] on the aerodynamic side but obviously we cannot go too much into detail,” he concluded.