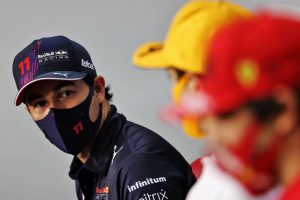 Sergio Perez finds it hard to believe F1 2021 pre-season is done – but is happy with the “good potential” of his Red Bull.

The Mexican will be back at the Bahrain International Circuit on the last weekend of March for his debut grand prix as a Red Bull driver, having been selected to replace Alex Albon for 2021 as Max Verstappen’s team-mate.

With only three days of testing, and just one-and-a-half in the car for himself, Perez may be somewhat undercooked when the serious competitive business gets going.

But the encouragement derived by the 31-year-old comes from the performance of the RB16B, which topped the testing timesheet in two of the opening five sessions including by Perez on Sunday morning – when he completed fewer laps than all of his rivals.

“A very limited amount of running in testing. [But] we are improving every time we are in the car. We seem to be getting more comfortable. We were able to get through different set-up items.

“I think now we just have to look forward to the race weekend. Conditions will be very different when we come back here. They were tricky today with the wind, but all in all I’m pleased with my pre-season testing.”

That’s @SChecoPerez done for pre-season #F1Testing ✅ Completing 49 laps for the morning with a fastest time of 1:30.187 ?? pic.twitter.com/u13MOB6Dyf

Perez was keen to stress, however, that the record 23-race campaign will be a marathon rather than a sprint as Red Bull aim to hunt down Mercedes and make it a true World Championship tussle.

“To say I’m ready, you have no other option,” he added. “We just have to make the most of it and start step by step, be patient in the beginning and things will come to us.

“I have to say, the first Red Bull I’ve driven feels pretty good and certainly there is good potential in the car. I’m pretty excited. I think we’ve got a good car underneath us and the team is doing a fantastic job.

“As I’ve said, it doesn’t matter where we start in Bahrain, it’s where we finish in Abu Dhabi, so let’s go ahead step by step and it should be a good season for us.”