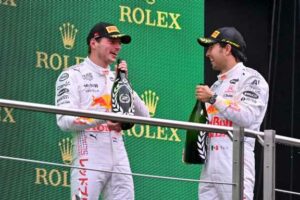 Sergio Perez has given a ringing endorsement of his team-mate Max Verstappen’s talents, saying the Dutchman has made the “least mistakes” in F1 this year.

Verstappen would be entitled to think he should be more than six points ahead in the Drivers’ World Championship standings with six races remaining, if only because of the tyre blowout his Red Bull car sustained when a few laps from victory in the Azerbaijan Grand Prix.

And that is without factoring in the crashes in which he was involved in Britain and Hungary, neither of which was adjudged to be Verstappen’s fault but which cost him valuable points.

The Dutchman was penalised by the stewards for his Monza collision with title rival Lewis Hamilton, but Perez sees that as being a rare error from a driver who, for the Mexican, has shown no obvious weaknesses since they became colleagues at the start of this season.

“I think Max has been the driver of the season, to be honest, so far,” Perez told reporters.

“I think he has done the least mistakes of anyone out there. He’s put things together at a very high level.

“The season is still very long so we’ll see later on. So far, I have been surprised in a very positive way on how he delivers without mistakes at such a high level.”

Asked whether Verstappen has any weaknesses, the 31-year-old replied: “I’ll have to think about it, but I don’t really think there are. Not obvious ones, yet.

“Obviously it’s not easy being Max’s team-mate because he’s at one with the car. He’s really delivering at a very high level.

“We’ve got a unique car in a way and it hasn’t been easy. You need to be mentally very strong after each day and I think that’s one of my strengths, to take the most out of it and try to get the maximum out of every Sunday.

“It’s something very different to what I was used to. Some cars are easier to adapt to than others, some drivers adapt easier to others.

“I had a difficult process to adapt to the car, but nothing too dramatic or nothing that stands out. It’s obviously a very good package and a very competitive one.

“Max is showing this car is, if not the best, one of the best out there.”