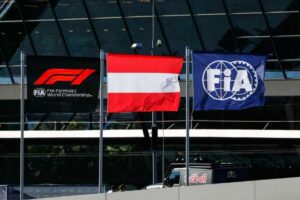 Following Sebastian Vettel being called up before the stewards, six more drivers have received summons from officials at the Austrian Grand Prix.

A total of seven drivers will be visiting the stewards’ offices at the Red Bull Ring on Saturday evening.

Following on from Aston Martin’s Vettel being called up on the grounds of allegedly causing “moral injury” to the FIA at Friday’s drivers’ briefing, six more drivers have been called up for alleged transgressions during the formation lap for sprint qualifying.

Mercedes’ George Russell, who finished the race in fourth, as well as fifth-place finisher Sergio Perez have been called up for an “alleged breach of Article 33.1 of the FIA Formula 1 Sporting Regulations – Messages to drivers during the second formation lap at 16:33.”

This article states “the driver must drive the car alone and unaided”.

Russell and Perez will be joined by Aston Martin’s Lance Stroll, Haas’ Mick Schumacher, Alpine’s Esteban Ocon and McLaren’s Daniel Ricciardo – all of whom have been called up on the same grounds.

This article will be updated…