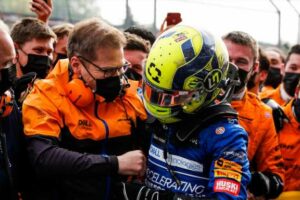 Lando Norris will, in a few years, have “everything a top driver” needs, but Andreas Seidl concedes that doesn’t guarantee him a World title.

Earlier this week Norris committed his future to McLaren, re-signing with the Woking team in what is said to be a “multi-year deal”.

Some reports claim it is a two-year contract while others says he will be with McLaren through to the end of 2024.

Norris is hoping the stability coupled with McLaren’s improved form will soon see him fighting for race wins, and perhaps even a World title.

The Brit has been one of the stars at the start of this year’s championship, sitting fourth in the Drivers’ standings and still the only non-Mercedes or Red Bull driver to reach the podium.

Seidl is impressed with his growth as a driver.

“I guess he drew the right conclusions about how to take the next step,” the McLaren team boss told Formel1.de.

“He now knows what he needs from the team and the car in order to perform well.”

“It’s impressive to see what he’s doing on the track, how he manages the laps in qualifying, how he starts, how he drives the first laps in the race, how he plans the overtaking manoeuvres, how he always keeps track of things.

“He just uses the experience he has built up. We always knew he had the talent.”

But it that enough to signal that in Norris, McLaren have a future World Champion?

“If you read the comments, we have a lot of future World Champions in the field,” answered Seidl, “but I wonder where all these guys are going because there can only be one World Champion each year.”

Convinced that Norris will have “everything that a top driver in Formula 1 needs in a few years”, he conceded that “World Champion is another matter”.

He continued: “It’s difficult to predict. You have to be in the right car at the right time and, as the driver, get it done 23 times a year – not just three times.”

“If we take the same steps on the team side, he can fight for race wins in the future. I am sure that we will have a lot of fun and success with him in the future.”