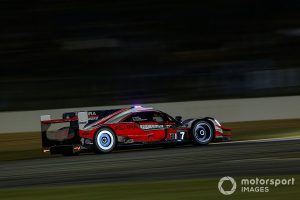 Ricky Taylor put the #7 Acura Team Penske ARX-05 at the top of the times in the third practice session for this weekend’s IMSA WeatherTech SportsCar Championship finale.

Taylor lapped the 3.74-mile airport course in 1min48.358sec, to go 0.177sec faster than Pipo Derani’s Action Express Racing Cadillac DPi-V.R. This was despite Taylor’s teammate Helio Castroneves requiring a new nose on the car after a minor brush with a tire wall.

Mikkel Jensen put Starworks at the head of the LMP2 class, two seconds ahead of PR1 Mathiasen Motorsports’ Simon Trummer and 2.3 ahead of the Inter Europol machine of Naveen Rao.

The Porsche 911s maintained their dominance of GT Le Mans this weekend, Nick Tandy lapping 0.030sec than teammate Laurens Vanthoor, with Connor De Phillippi’s BMW M8 in third. Oliver Gavin had a minor off in the #4 Corvette C8.R but was only 0.65sec off top time in class.

Franck Perera kept the Grasser Racing Team at the top of the GT Daytona class, with a 2min02.510sec lap in the Lamborghini Huracan, but Lawson Aschenbach’s Riley Motorsports Mercedes-AMG GT3 was just 0.13sec behind and only one-tenth faster than Ian James in the Heart of Racing Aston Martin Vantage.

Nick Yelloly, who is subbing for Bill Auberlen in the Turner Motorsports BMW M6, was an impressive sixth fastest despite zero previous experience of the track.

Qualifying for the Sebring 12 Hours begins at 10.15am local time on Friday.