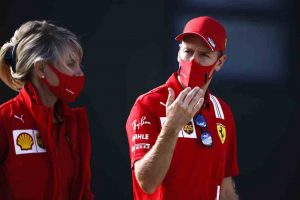 Sebastian Vettel has suggested a lack of courage was behind Ferrari’s decision to pit early in order to avoid Charles Leclerc having to overtake him.

Vettel was trying to recover from a first lap spin before he was told by the team to pit earlier than he would have liked. Ferrari’s decision put the four-time World Champion into a lot of traffic and he openly criticised the team for bringing him in.

“It is in the gap that we didn’t like,” Vettel said on team radio.

“We spoke about it this morning. I’ll hang in there but you know that you’ve messed up.”

Vettel only managed to finish P12 compared to Leclerc’s solid P4 and the departing Ferrari driver continued to question the strategy calls after the race.

“Maybe we did not have the courage to let it come to Charles overtaking me, although he was on a different strategy and we preferred to rather pit me to avoid that,” Vettel told RTL.

“I had enough speed to stay out. The guys that were infront of me after my pit stop were doing the exact same lap times that I did with older tyres.”

He added to Sky F1: “We spoke this morning that there’s no point pitting, knowing that we will run into traffic, and that’s exactly what we did.

“We went also on a hard tyre, which we then only had on for roughly 10 laps, probably not even that. So it didn’t make any sense.

“I mean, why would you put the hard for 10 laps and then put the medium for 20 laps? I was running out of tyres towards the end. So we spoke about exactly that. I guess not the best work we could have done today.”

The end of the 70th Anniversary Grand Prix caps off a miserable two weekends for Vettel at Silverstone. He did at least have a better feeling with the car in the second race even if the pace was still the same.

“Honestly, I think my pace was the same for both races at Silverstone, I don’t think there was an improvement,” he continued.

“And that’s a question mark, but I can’t do much about it. I will have to try to keep doing my best and keep calm as much as possible, looking ahead to next week.

“We’ve been going through a very bad two weeks. I don’t know what happened in terms of pace. It’s a little weird. It’s certainly not the best day for me right now, it’s a bit frustrating.

“I tried to do something today, but the way I spun on the first lap didn’t help.

I don’t know what happened, because I tried to keep myself out of trouble but I felt a hit. It must have been the kerb, and that made me lose grip and spin. It took me by surprise.”