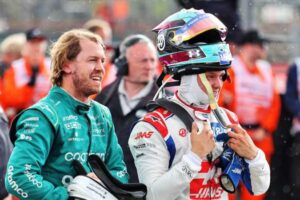 A few seconds behind his compatriot on track, Sebastian Vettel has revealed he was a cheerleader for Mick Schumacher at the end of the British Grand Prix.

Vettel has been serving as something of a mentor for the Haas driver during his 32-race Formula 1 career so far, which until Silverstone had not yielded a points-paying finish.

But Schumacher put that right with an eighth-place result to end an agonising wait for a top-10 – something which had been piling ever more pressure on the son of the seven-time former World Champion.

It could have been even better too, for the 23-year-old waged a late battle for P7 with none other than the reigning World Champion, Max Verstappen, who had dropped down the order due to damage on his Red Bull sustained by running over debris.

With a ringside seat for that tussle as he was just behind in ninth, Vettel found himself joining many of the spectators in the crowd who were urging on Schumacher – the British fans having cast Verstappen in something of a pantomime villain role due to his rivalry with home hero Lewis Hamilton.

It was so special to have Mick’s mom Corinna and sister Gina with us yesterday for Mick’s 8th place finish 😊#HaasF1 #BritishGP pic.twitter.com/pa3cT9ifzl

“I was very happy for him,” said Vettel, quoted by ESPN, of Schumacher, whose father he had idolised himself when growing up.

“I saw what happened and I saw he was closing the gap and I was actually screaming inside the car like ‘go Mick, go Mick!’”

The German duo are often seen together in the paddock and they conducted interviews in close proximity after the British Grand Prix.

“I think it’s been a long time since he deserves the result and it’s great to get it,” said the four-time former World Champion, speaking on his own 35th birthday.

Ironically, Schumacher’s previous best opportunity to score points had been at the Miami Grand Prix in May when he missed out due to a late crash with, of all people, Vettel.

“I thought maybe I’ll get him at the end but they were too quick,” added Vettel of the British Grand Prix. “It was actually entertaining to see them (Schumacher and Verstappen) going for it every time into Turn 15.

“It looked like you [and Verstappen] were side by side,” he said, turning to Schumacher. “Also, into Turn 6, I think sometimes, down the Wellington straight.”

Schumacher was joined in the points by his team-mate, Kevin Magnussen, as Haas lifted their season’s total to 20 points – putting them two ahead of Vettel’s Aston Martin team.