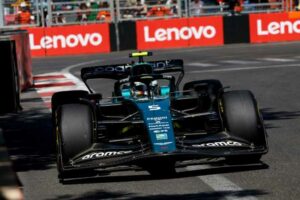 Sebastian Vettel said he believed he could have challenged for P5 had he not gone off the track when overtaking Esteban Ocon in the Azerbaijan Grand Prix.

The German recorded his highest points score of the season so far with P6 in Baku, but was left ruing what could have been having lost time when he used the emergency lane at Turn 3.

Vettel pulled out past Ocon on the long straight on lap 13 but having completed the overtake, his left front tyre locked up and instead of attempting the corner, the 34-year-old aborted and drove into the run-off area. He was able to quickly turn himself the right way but not before Ocon, Lewis Hamilton and Yuki Tsunoda had overtaken him.

Twelve laps later he did pull off the overtake on Ocon but was unable to challenge Pierre Gasly later in the race. Vettel admitted Hamilton in P4 may have been a step too far but thought a P5 battle was realistic.

“I think overall sixth is really good,” he told F1.com. “I think we are really happy with the result. We had an amazing pit-stop where we beat Mercedes with Lewis.

“After that, I think I was already past Esteban then [I braked] a bit late because I was sure he’s gonna battle for it. But I wasn’t quite sure [if I would make the corner] so I took the emergency lane and lost a lot of time. Without that time, I think we could have had a battle for P5 on our hands. But nevertheless, I think it’s a really good result.”

The result was a notable upturn in the form of Aston Martin, who had looked to be in trouble earlier in the season, becoming the last team to get a point. But consecutive points finishes for Vettel have put the team alongside Haas in eighth.

Vettel said he was “very pleased” for everyone at their Silverstone HQ and that they look as if they are starting to reach the limits of the car now.

“We’ve been chasing the limits of this car now a little bit more than it seems to pay off,” the four-time former World Champion said.

“But we need to also be realistic. I think this weekend, we were a bit stronger than Sauber [Alfa Romeo], matching probably the Alpines and matching the AlphaTauris. So then it puts us in a different ball park.

“I think overall, we [are] very pleased and also for everyone back at Silverstone, back at base, I think it’s a great result.”