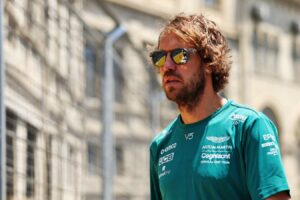 Masi was replaced in the role after the controversial and hotly-debated ending to the 2021 season in Abu Dhabi, which saw Max Verstappen eventually crowned World Champion after appeals by Mercedes claiming Masi had not followed the FIA’s own rules in directing the race.

Following an internal investigation by the FIA, Niels Wittich and Eduardo Freitas have now moved across from other FIA series to share the race directorship, in the hope of decreasing the demands on one person taking on such an integral role in Formula 1.

Masi had shadowed long-time race director Charlie Whiting before his sudden passing, which then put Masi in the top job.

As a result of that, Aston Martin driver Vettel believes the time Masi spent in Race Control would be beneficial in helping run proceedings now.

“What we are missing now is the experience that Michael had and brought to the job because he did it for so long and grew up with it,” Vettel said, quoted by PA news agency at the launch of ‘IL PITSTOP’ at an Aston Martin sponsor event.

“It is not an easy position now because there is more focus and more spotlight on what is happening at Race Control.

“But I hope things calm down and we find a way to work together, as in the drivers and the FIA. You cannot make everybody happy but we need to try and make both sides more happy.”

Race Control came in for criticism in Monaco for their handling of the start and restart of the race in wet conditions.

FIA president Mohammed Ben Sulayem previously provided a separate opinion which aligns with Vettel, in the sense that race directors need to be developed and gain significant experience over a period of time before they can be in charge of races of such magnitude.

He recently told Speedweek: “We have a great many tasks ahead of us. Formula 1 alone is a huge challenge. The GP drivers have asked me to take care of the Race Control issue.

“But I can’t very well search for new race directors on Google or buy them on Amazon. Race directors have to be trained carefully and over years.

“The race directors of the future will be trained in Geneva. We achieve three goals at the same time – training, the current race stewards get more practice and we have more experts on hand when there is an emergency.”