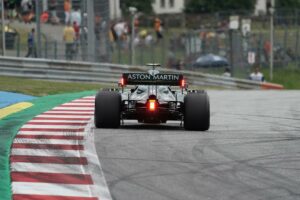 Sebastian Vettel suspects that Aston Martin went more “aggressive” than others during Friday practice at the Austrian Grand Prix.

Vettel ended FP2 up in the dizzy heights of P5, representing a major improvement on his pace from last weekend at the Red Bull Ring which saw him fail to make Q3 and then finish the Styrian Grand Prix outside of the points.

The four-time World Champion is not getting carried away yet though, suspecting that Aston Martin simply attacked the Friday sessions more than their rivals.

“It’s Friday, so obviously if we are P5 tomorrow that would be amazing, but it’s still early days and I think that maybe we were a little bit more aggressive than other people,” he told reporters in the paddock.

“But it’s definitely good, we will take it and I think we tried a couple of things as well, so let’s see tomorrow.

“Different conditions this weekend, hopefully we have done our homework in the time in between and are a bit stronger this weekend. Q3 is what we are aiming for.”

The Austrian Grand Prix also sees fans return in force at the Red Bull Ring, and as expected there was plenty of support for Vettel.

He also noticed that Max Verstappen’s Dutch fans were back, sarcastically mistaking their orange for McLaren papaya, but in all seriousness Vettel was delighted to see the grandstands bustling again.

“I had traffic coming in, I cycle in so I don’t mind to pass all the traffic, but it was the first time for a long time and to see so many fans coming to the track is obviously very nice,” he said.

“I hope that they still keep a little bit of distance and stay safe, but it’s definitely great to have them back.”

For Lance Stroll it was an even better FP2 and he claimed P4, six-tenths down on Lewis Hamilton’s benchmark, and he praised Pirelli for bringing their softest compounds for this weekend, hoping it leads to an interesting race.

“Yes, it’s definitely different from last week, I think it’s great that Pirelli run a different tyre, it mixes things up,” said the Canadian when asked if the switch to C3, C4 and C5 tyres had made a difference.

“It just behaves a little bit differently, but it feels good on the softer compounds and it might mix up the strategies for the race a little bit which could be cool.”