Sebastian Vettel says his Ferrari is still a 'handful' to drive 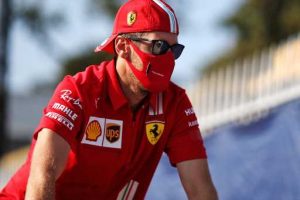 Sebastian Vettel is predicting another difficult race for Ferrari at the Italian Grand Prix, saying the SF100 is still a “handful”.

Coming off the back of their worst showing since 2010 at the Belgian Grand Prix, Ferrari showed some signs of improvement during Friday practice ahead of their home race – the Italian Grand Prix at Monza.

Vettel finished FP1 all the way down in P19, but in the afternoon session was able to claw his way up to P12 by the time the chequered flag came out.

There was, however, a trademark spin for the four-time World Champion at Lesmo 1, and Vettel is predicting another difficult race for Ferrari at the first of three home events for them this season, saying his car remains a “handful”.

“It will be a tricky one in the race, we’ll be fighting a lot of cars, we will be in the pack. It’s not like racing in front and clean air and having a nice car,” he told Racefans.net.

“But that’s something to worry about on Sunday. Now we worry for tomorrow and hopefully get a better car because the better the car, it will also help on Sunday.

“The car is difficult to drive, but it’s not the first time.

“Where are we lacking? I think we’re losing down the straights, which is expected. In terms of where we want to have a better car to drive, we’re lacking grip on corner entry, pretty much all four wheels, the car is sliding quite a lot.

“It’s a handful, it’s very difficult to get everything right to get the lap together. But we’re trying to make it a bit better for tomorrow.”

Vettel also criticised the “balloon” tyre pressures which he felt were causing higher rates of degradation and therefore making his SF1000 even more of a pain to drive.

Pirelli have been required to raise the minimum pressure of their tyres to cope with the current levels of downforce on the cars.

“Part of the contributor for that in the race is obviously the balloon pressures that we are forced to run at, that doesn’t help,” he told Racefans.net after Friday practice at Monza.

“It’s far away from, I think, where the tyres would like to run. But we have to obviously stick to the rules.”