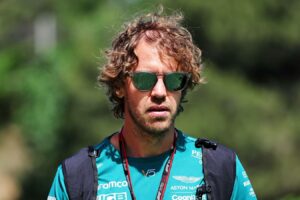 Sebastian Vettel has explained what happened when his backpack was stolen outside his hotel after the Spanish Grand Prix.

The four-time former World Champion had the backpack pinched through a car window and upon realising, set off on a scooter to try and track down his belongings.

The Aston Martin driver knew he could locate his headphones via a tracking app and found them after they had been dumped, but unfortunately was not reunited with any of the other stolen property.

Speaking at the Monaco Grand Prix press conference, Vettel said he had been concerned his passport had also been in the backpack but it turned out to be in another piece of his luggage.

On the circumstances of the theft, Vettel told reporters: “I was checking out in the morning from the hotel and had my bag in the car. When I just quickly went back in and came back out, the bag was gone.

“After a while I realised my headphones were in the bag and I could locate them. I found the headphones but didn’t find the bag, so it was not really a chase.

“Obviously a bit disappointed to lose the bag. [The headphones] were in the bag but once I found them, they were in a flowerpot. I guess the person who stole it, he or she knew exactly that you can be tracked.”

Asked if he had been concerned for his own safety in attempting to pursue the thieves, the German said: “I wanted my bag, that was all that was in my mind.”

Regarding what else had been in the backpack, he added: “There was not much valuables there. I wasn’t sure at the time whether my passport was in there or not. As it happened, it was in another bag, so I was lucky.

“But I had, like, ID and insurance card, driver’s licence…that boring stuff that takes time to get back and you have to apply and fill out forms. I wasn’t very looking forward to that.

“Fortunately, there was no money in there. I guess whoever picked the backpack, it wasn’t a great deal [for them] because the only thing that was valuable maybe was the headphones, which they had to sort of lose to not be found.

“But I really liked the backpack!

“I was just going there to see if I can spot someone and maybe nick it back and then jump back on the scooter, but there was nobody there.”