Home » Sebastian Vettel: Results are not a request concert

Sebastian Vettel: Results are not a request concert 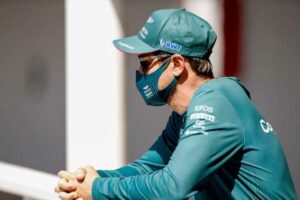 Perhaps the biggest disappointment of this season so far, Sebastian Vettel says it “is what it is” and Aston Martin are doing all they can to improve.

Last season Aston Martin, racing as Racing Point, were one of the stars of the championship as their pink Mercedes carried Sergio Perez and Lance Stroll to four podiums, including Perez’s Sakhir Grand Prix win.

The team also scored in all but one race, finishing with 195 points to sit fourth in the standings. It would have been P3 had they not been docked 15 points for running Mercedes brake ducts.

With this year’s cars largely based on last season’s, barring one or two small changes to the rules, Aston Martin were billed by many as one of the teams that would fight for best of the rest in the standings.

Instead they are fighting just to score a single point.

Aston Martin believe that is because one of those small changes, a piece of the floor being cut away in front of the rear tyres to reduce downforce, has hurt F1’s low-rake cars, such as the AMR21, more than it has its high-rake counterparts.

Vettel has yet to get off the mark this season while his team-mate Stroll has five points.

Speaking to Sky Germany in the Barcelona paddock, Vettel conceded: “It is what it is. We’re also realistic.

“Of course, it’s not the way we would have liked it to be, but at the end of the day it’s not a request concert.

“Now the situation is the way it is.

“We’re trying to improve every little step we can, in order to be able to take more points with us in the midfield.”

With the 2021 rules seemingly against them, Aston Martin now have to decide when to give up on this year’s championship and instead focus all their attention on next season and its all-new cars.

“That is the big question,” said Vettel. “This year is also important for us. Obviously, we don’t want to be satisfied with where we are now.

“We are working on this year as well as looking ahead.”