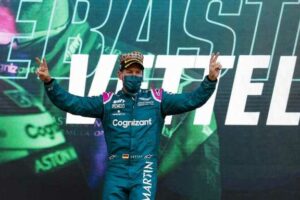 Sebastian Vettel has said we “need to watch out” Formula 1 does not become “too artificial” following the standing restart for a two-lap sprint race in Baku.

After Max Verstappen’s sudden crash from the race lead when his tyre blew out on the long, long straight in Baku, those in power had a decision to make: end the rest of the race behind the Safety Car or red flag and restart the race once the track was clear and safe.

They opted for the latter option, possibly influenced by Red Bull who put the safety of the grid first before themselves by expressing their concerns over the tyres as they were given no warning whatsoever that Verstappen’s tyre was about to self-destruct. A red flag gave every team the opportunity to change them.

But the powers-that-be went a step further and made it a standing restart with just two laps of the race to run. And, even though Vettel was one of the drivers to benefit from it with a wonderful P2 finish, he was not completely convinced it was the right idea.

A day like today is only possible when a team works as one.

To our trackside team, the team back at Silverstone, our partners and you, our fans… thank you.

This is just the beginning. 💚 pic.twitter.com/7p0V0C1r5e

“It has become more and more like this in the past, more and more focused on creating a show, so I hope that in the future the races are more exciting,” Vettel said in the post-race conference when asked a question by Autosport about whether he was surprised a standing restart was chosen.

“I think it was probably an exciting race for various things happening and so on, but yeah, I think we just need to watch out that it doesn’t become too artificial and we don’t lose the roots of the sport.

“I was wondering a little bit why it took so long for the second time when Max had the shunt, for the Safety Car to come out because it was quite clear that he was standing in the middle of the track and it took a little bit long but we will see… we will find out why.”

Race winner Sergio Perez was a little more supportive of standing restarts but only if Formula 1 “keeps the consistency” in implementing them.

“In Imola we didn’t do it,” Perez recalled.

“We didn’t have the standing start but I think it was a bit unfair with the rain there, the right hand side of the track was damp.

“As long as we keep it consistent, going forward, it certainly helps the fans to be sticking to the TV. I think they have the most enjoyable two laps of the race, you know? And they certainly made it very hard for me.”