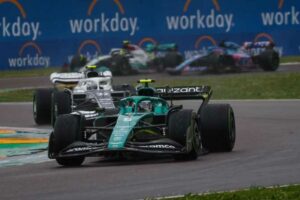 Sebastian Vettel opened his account for 2022 in what was a double points finish for Aston Martin at the Emilia Romagna Grand Prix.

Vettel is no stranger to delivering stand-out performances in the wet and did so again at Imola, going from P13 to P9 on the opening lap and retaining his place comfortably in the top 10 after being one of the earlier drivers to switch from intermediates to slick tyres on the drying track.

From there, it was a case of holding on and that is exactly what Vettel did, finishing P8 to score his first points of the season.

“I think it was an unbelievable race for us,” he told reporters.

“We capitalised on the conditions, but after that we were just trying to hang on as much as we could and we did well keeping faster cars behind us.

“I think it was a very strong race.”

This is what it means. 💚

Points on the board is strong progress, but we know there's still work to do.#WeClimbTogether pic.twitter.com/LE53rJWwRc

Vettel was able to keep Haas’ Kevin Magnussen at bay behind, explaining that although the Danish racer was in a “much faster package” his tyres seemed to fall away, which allowed Vettel to keep P8.

And with Vettel’s team-mate Lance Stroll crossing the line P10, it meant Aston Martin’s first points of 2022 came in a double points finish.

Aston Martin have improved to P9 in the Constructors’ Championship with every team now off the mark after four races of the season.

“I wasn’t sure if we could really go [to the end] on the same set of tyres but I guess we had to, so I had to manage it and at the same time push,” Vettel explained.

“Kevin had a much faster package but we were able to fend him off, then he was running into trouble with his tyres so I think we managed well and it’s good also to have both cars in the points, so that’s really a good day for us.”

Stroll noted the damp conditions and colder temperatures seemed to suit Aston Martin on a weekend when they took advantage of every opportunity.

He now urges the team to push for further gains in the coming races.

“It’s been a positive weekend for the team and it’s great to see both cars in the points,” he told the Aston Martin website.

“It was a well-earned point for us because there was intense pressure throughout the race, not to mention the changeable weather conditions.

“At the beginning of the race we performed strongly. Everyone was battling overheating tyres and a drying track, but we kept [Lewis] Hamilton behind and pressured [Yuki] Tsunoda ahead.

“Once we switched to the medium tyres we continued to show good pace and pulled away from the train of cars behind us. I’m happy we performed better this weekend and made the most of the opportunities that came our way.

“Qualifying and the race were in cooler and wet conditions, which may have suited us. We will enjoy today but will continue to keep pushing for more in the coming races.”