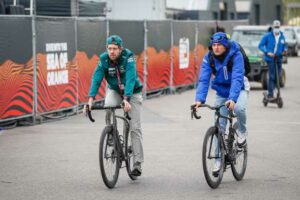 Sebastian Vettel believes that Mick Schumacher has pushed his Haas team forward in his rookie season on the grid.

It’s been a difficult first year in the sport for the 22-year-old with him spending it at the back of the field in the slowest car on the grid.

That has meant he’s been unable to fight for points and has rarely even had the pace to battle any other driver other than team-mate Nikita Mazepin.

Despite that though, he has impressed people with his dominance over the Russian, while his team have often praised his attitude and work ethic.

Vettel also feels his compatriot has had a good first year all things considered and thinks that he’s improved his team.

“It’s very difficult with the car. Everyone knows that it is the weakest car in the field,” the four-time World Champion told Sky Deutschland.

“And still to stay calm and show the consistency and also the motivation… We are in communication more often and I think he has pushed the whole team, even if the starting position is not easy.”

Here’s to another year with @haasf1team🤩 #MSC47 @insideFDA

Before Schumacher joined the grid, Vettel promised to help the son of Michael in any way he could when he eventually did enter the fray.

He’s lived up to that promise, with the two enjoying a close relationship this year, often spending time together during race weekends.

The Aston Martin driver says it’s often easy to do as their team motorhomes are often next to each other, and is enjoying helping Mick, although he’s not sure how helpful he actually is.

“If we stand next to each other with the camper, then there is a bit of time,” said the 34-year-old.

“In any case, it is nice that the exchange continues to be active. I have always said that I am open to any tips I can give.

“Whether they are always useful is another question. But I am happy to give them.”

Both are guaranteed to remain in the sport for next season, which the Haas driver is pleased about.

“It’s nice that we are still motorhome neighbours,” he said.

“So I’m looking forward to it and probably one or two barbecue evenings.”