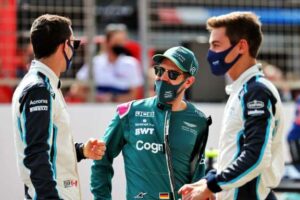 Sebastian Vettel has defended George Russell after he was criticised for having a slap at Valtteri Bottas in the immediate aftermath of their Imola crash.

Russell was having one of his best grands prix as a Williams driver, running in 10th place at the Emilia Romagna Grand Prix with Bottas just in front of him.

Russell decided to attack for P9 but it went horribly wrong when he put a wheel on the wet grass, lost control and took out himself and the Mercedes driver.

Immediately after climbing out of his car, he stormed over to Bottas, who was still sitting in his wrecked W12, and slapped him on his race helmet.

Mercedes motorsport boss Toto Wolff slated Russell, but more for the crash than the slap, while some pundits questioned the 23-year-old’s mindset in light of the slap.

Vettel has defended Russell’s actions, saying either F1 wants drivers who show their emotions, or it doesn’t.

“Emotions go both ways,” he said in Thursday’s driver press conference where he was partnered with Russell.

“They go positive and they go negative otherwise they wouldn’t be emotions. I don’t think they can swing only one way. There would be no highs without lows and no lows without highs.

“The real question I guess is what do people want?

“The secret is you can’t please everyone, and just be yourself.

“Obviously there’s limits to all actions that we do on track and maybe off track, but I don’t think he should worry that much.”

Russell, who is joining a social media blackout in response to online abuse and racism, has apologised for his actions.

He told Channel 4: “I was just disappointed in myself with how I reacted afterwards. I felt like that wasn’t me.

“I went against my own instincts to walk away from the incident because I wanted to show a bit of emotion. To be honest, my emotions were incredibly high having just crashed at 200mph. So many things ran through my mind.

“It isn’t going to change my racing approach when I’m racing against competitors. If I see an opportunity, if I see a gap, I’m going to go for it.

“I really need to take the full picture in before giving a rash judgement to the situation, which is what I did and hence why I felt it was important to put an apology out there for the people I felt like I let down with those actions after the race.”