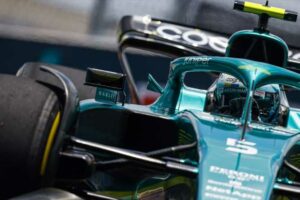 Sebastian Vettel says points should be “there” in Miami despite a frustrating qualifying session concluding with him down in 13th place.

Formula 1 is racing at the new Miami International Autodrome this weekend, the drivers putting in the laps around the Hard Rock Stadium complex in Miami Gardens.

The track is proving to be a handful as it is one where the drivers can pay a big price for a very small mistake.

Vettel found that out in qualifying.

Putting in the laps in Q2, the Aston Martin driver got it slightly wrong at the chicane and crossed the line with a 1:30.214.

That meant he missed out on Q3 by 0.086s. That gap, though, was big enough to leave him down in 13th place such was the closely-fought battle in the midfield.

Told he wasn’t joining his team-mate Lance Stroll in Q3, Vettel bemoaned over the radio: “Ah no! I think I lost it in the chicane.”

“On the last run I made a small mistake in the narrow chicane. That was probably what cost my entry into the last qualifying segment.

“It probably cost more than the tenth of a second that didn’t make it in the end.

“I just took a little too much risk, so I was a little too fast. Then I tried to brake harder, but that didn’t work. So I ran out of space. I didn’t hit the apex cleanly.”

Lining up P13 on the grid, the German says it is “frustrating” but he’s determined a top-ten result is still on the cards.

“We’re not doing too badly,” he said. “There should be points there.”

His team-mate Stroll will line up P10 on the grid.

“From P10 we should be in a good position to fight for points,” he said.

“With a new race, there are always a lot of unknown factors at play and there are bound to be opportunities.

“I have to say, though, after so much excitement in the build-up to this race, I am totally ready to go racing.”