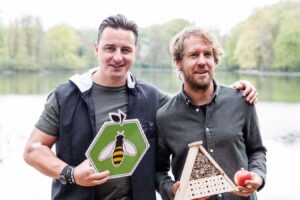 Sebastian Vettel has taken on an ambassadorial role with the BEESandAPPLE project, which aims to create new habitat for bees in the hope of improving sustainability in the food industry.

The Aston Martin driver joined the “Keep the Bees Humming” initiative alongside Austrian singer Andreas Gabalier as they gave a million flowers to BEESandAPPLE, to help them towards their goal of creating 100 hectares of new habitat for bees to pollinate.

BEESandAPPLE was launched last year by Frutura, Austria’s largest fruit and vegetable producer and distributor, with the aim of helping the European Union towards its target of creating a more sustainable future for food production by 2030.

Vettel said of his new role: “Taking responsibility for the future doesn’t mean you have to sacrifice your quality of life – it’s about finding sustainable ways to have fun.

We can all play our part in saving the planet, and it can be as simple as planting a seed.

Tap below to discover the story behind Seb's pledge to gift one million flowers to Germany as part of the BEESandAPPLE project. 🐝

“That way, you can enjoy life with a clear conscience and protect the environment at the same time.

“I became an ambassador for the BEESandAPPLE project because I want everyone to know that their actions can make a real difference.”

Vettel’s work stretches beyond this latest venture, having run a competition between local schoolchildren between race weekends in Austria last July to create the best ‘bee hotel’ they could, providing a safe space for them beyond the outside world.

“The idea behind the project is to create more space for insects and bees because they have a very important task,” Vettel said last year.

“Without bees, the world wouldn’t be as good as it is.”

Vettel has been a prominent voice in Formula 1 in speaking up for the need for the sport to become more sustainable, and even spent time in 2020 completing an internship at an organic bio farm.

Frutura’s project aims to increase awareness surrounding the need for biodiversity in food production, which in turn should help farmers become more self-sufficient in growing their own crops, if the project is successful.