Sebastian Vettel and Ted Kravitz argue over a piece of cheese 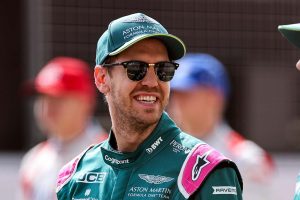 Ever seen a reporter and a Formula 1 driver argue over a piece of cheese? Well, now you have, and yes, it was just as weird and funny as it sounds.

Sebastian Vettel, after a busy morning of testing on the Bahrain International Circuit with his new Aston Martin team, was probably expecting a grilling (no pun intended) on how he found the AMR21 when Sky Sports’ Ted Kravitz approached him.

But what he will certainly not have expected is to start the interview with a minute-and-a-half chat about a piece of cheese.

Filming for his show, Ted’s Testing Notebook, Kravitz could not help himself by starting the interview with a joke, saying: “Aston Martin, license to thrill. You alright? Want some cheese? Never mind. How’s the car?”

Understandably, Seb was not quite ready to answer that final question, first needing to clear up what the hell had just happened.

He posed the question: “Why do you come out at the break and carry cheese around? What cheese is it, stilton?”

After confirming the cheese was actually comte, Kravitz started to try and justify why he had it, telling the new Aston Martin man that it demonstrates the downforce changes, showing the exclusion area of the floor in front of the rear tyre.

Seb was having none of it, though, suggesting a piece of paper would be better, and he was also unhappy with the fact that a perfectly good piece of cheese had gone to waste. We’ll let you enjoy the conversation.

SV: “You know what would be sad now? If you don’t eat that now it’ll be a waste.”
TK: “It’s not a good idea Seb, it’s been in the Bahraini sun all day. It’s wilting.”
SV: “But it’s a waste Ted, you shouldn’t be proud of that. Take a piece of paper, a pencil and just draw a triangle on that.”
TK: “But look it perfectly demonstrates…”
SV: “I think I win this debate.”
TK: “…that is 10cm…”
SV: “I think I win this debate.”
TK: “…and then there is a cutout exclusion area in front of the floor where you’re not allowed…”
SV: “Just admit you’ve lost with your cheese.”
TK: “No.”
SV: “You should eat it put it in the fridge.”

Seb thinks he won this interaction, but can anybody really win a conversation about a piece of cheese?

They eventually went on to actually speak about the testing side of things, but not before Seb could made a joke about the cheese looking like a piece of Renault’s car last year.

Anyway, this was a wonderfully weird way to end the day ahead of another busy day of busy on Saturday.