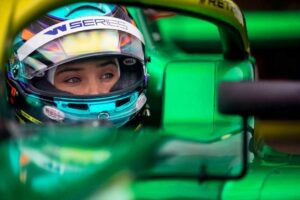 It’s been 98 weeks since the female-only W Series championship had a real-world, IRL race week. In racing terms, that’s an incredibly long wait—and people who like going fast aren’t exactly known for their patience. But after testing in Anglesey, Wales last month it is finally time to hit the track in anger as the junior series—designed to promote women racers—gets its spot as part of the Styrian Grand Prix weekend, alongside Formula One.

Sabré Cook will be the only American driver racing around Spielberg this weekend. Across F1, W Series, and the Porsche Supercup, only her car’s got the Stars and Stripes. In her second season of W Series, she’ll be aiming to put it on the top step of the podium, too. 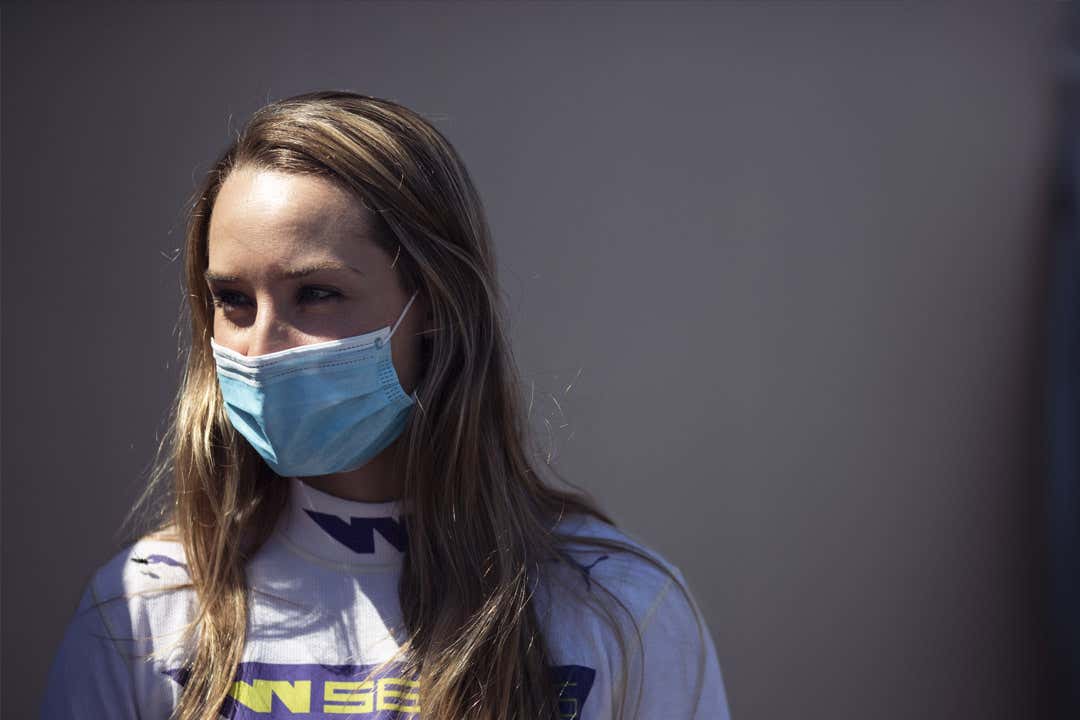 Speaking at W Series’ testing event, Cook said that returning to racing, after such a long break, had been a relief for the entire paddock.

“Obviously getting back in the cars is a great feeling and we’re all happy to be back, I think, and relieved to step back in and shake out the cobwebs and get reacquainted with the car,” she told me. “So it’s been really great so far.”

W Series is a junior championship, intended to prepare drivers to move on to other series like F1, Formula E, WEC, and IMSA, or IndyCar and Super Formula. That meant, when the COVID-19 pandemic hit, W Series suddenly found itself subject not only to its own problems but other peoples’.

Running as a support series for German touring cars in its first year, W Series ran seven races to crown Jamie Chadwick its inaugural champion. Organizers then geared up for the 2020 season with drivers selected and first training events held, only to find themselves unable to fit into rescheduled races.

The painful call was made to suspend the season and drivers were sent simulator rigs to compete in a virtual championship, instead. It was a compromise that, while one the rest of the racing world was making as well, couldn’t compensate for real-world track time, especially for drivers still trying to establish their careers.

So it is a relief to see the series survived and is now following the Grand Prix calendar, as Formula 2 and 3 and sometimes Formula Renault do, getting the advantage of F1 teams’ attention for the drivers as well as their marshaling and track setup for the series.

“Literally, I feel like almost everything has changed except for the cars themselves,” said Cook. “W Series is always adapting the way they run things. We’ve also got a new team running the cars this year, so all that is a bit different, but still obviously very good and very efficient.

“And then for myself, I’ve tried to do a lot of growing and a lot of development stuff over the last couple of years, especially on the year that we all had off—we’ll call it an off year for everyone.

“I think I have quite a different perspective and approach going into whatever I get in the car. And I’ve got a little more experience now, much more than I had originally when I first ever stepped foot in a W Series car. So I’m feeling more confident, for sure, going into the season.” 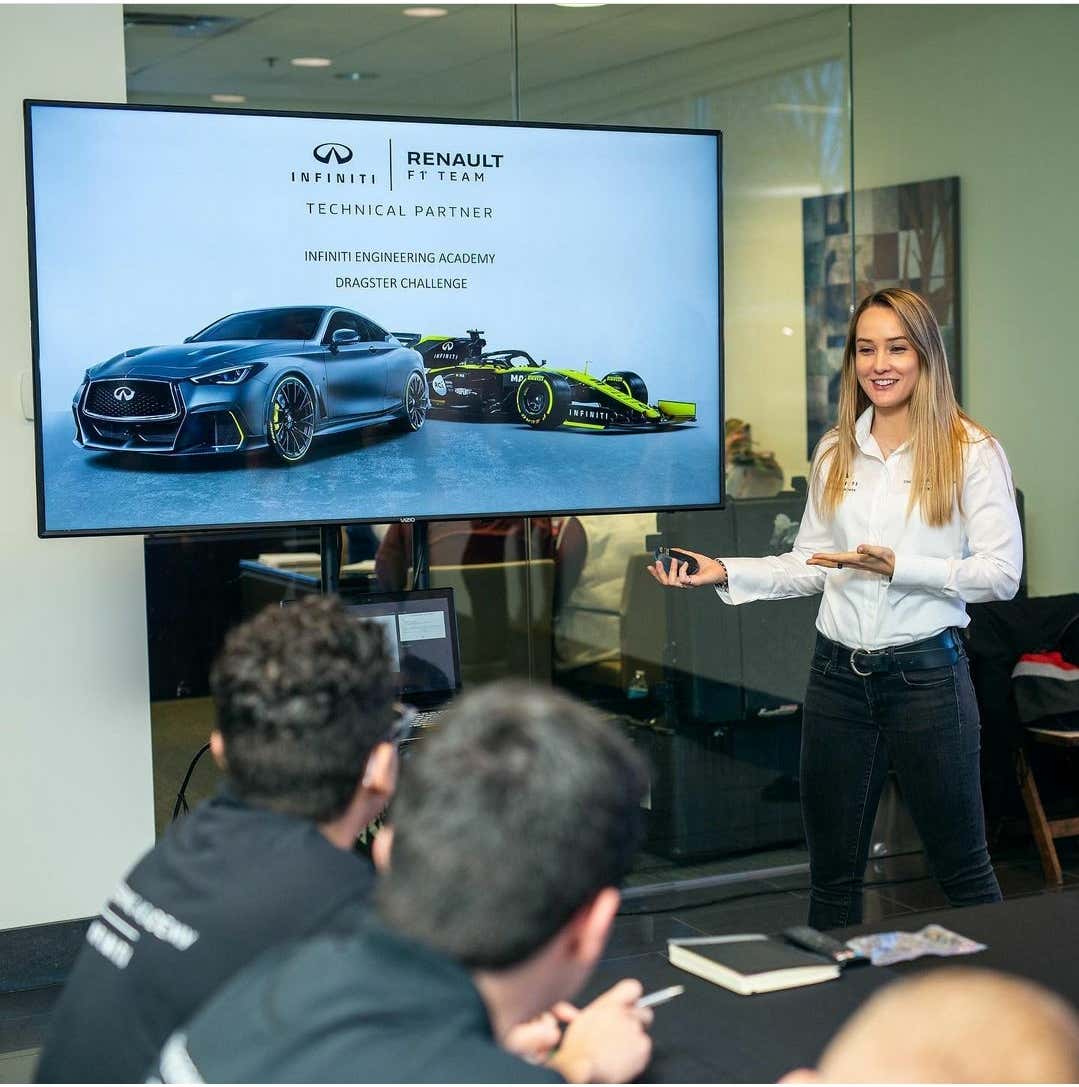 Cook is one of a rare breed of racing drivers, joined by a few others like British Formula E racer Oliver Turvey, since she’s actually an engineer herself. Her first experience with F1 machinery was working at Renault, after she joined the Infiniti Engineering Academy.

A much more common theme for drivers, unfortunately, is also one she shares in that she’d pretty much run out of money for racing before W Series came along. The series is a lifeline in the staggeringly expensive single-seater junior ladder, where a year of racing can cost more than €2 million ($2.4 million) and there’s no guarantee you can find a seat based on talent alone.

Reflecting on her second season in the series, Cook said that the experience she’d gained last time would carry through to this year’s race weekends.

“I can’t speak for other people, obviously, but for myself, I guess I feel like I found a pretty good system of how to approach a race weekend or a test session,” she said.

“So I kind of feel like I’ll have the same really strong base and then just adapt here and there to use what works and what doesn’t work. “

She said she was confident after waiting so long to get back on track, that the series had planned for anything that could happen now. “I’m sure W Series will work hard all year long to adapt to whatever may be going on globally. And then obviously adapting to make sure that the on track performance of the cars is just great no matter what.”

“And that any interactions that we we can have with the media and the fans, I’m sure they’ll constantly adapt that to get the most out of it during the season.“

W Series didn’t race at the Red Bull Ring in its inaugural season, so it’ll be hitting the track there for the first time this weekend. The W Series car is the same as in the 2019 season, the Alfa Romeo-powered Tatuus chassis that runs to roughly regional Formula 3 specs.

Cook placed 12th in her first year in the series, qualifying her to continue for another season. This time, the stakes are higher than the first as the W Series champion will be eligible for 15 of the FIA’s Super License points, a major step on the way to a license for F1 or Formula E.

“I’m obviously very excited,” said Cook about going back racing alongside F1. “The fact that we get to be on that platform and just be able to be a part of that and get glimpses into the operations of that on a regular basis will be great. It’ll boost all of us drivers as well. And I think it will be a really great experience for everyone.”