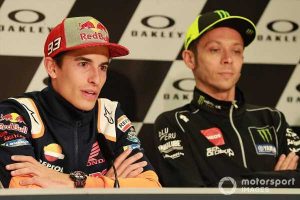 Marquez broke his right humerus in a crash during the season-opening Spanish Grand Prix last July and underwent an operation immediately afterwards, before being cleared to ride the following weekend in the Andalusian GP.

This aggravated his injury and ultimately led to him requiring two more operations over the rest of the year, with the six-time MotoGP world champion missing the entire season.

In an interview with Corriere della Sera, Rossi said Dorna broke its own rules implemented to stop hasty returns from injury following Jorge Lorenzo’s Assen comeback in 2013 48 hours after surgery on a broken collarbone.

“This mistake was wanting to run again too soon as soon as the operation [ended], and I don’t understand how they allowed it to happen,” Rossi said.

“With the return of Marquez, they all jumped at once, surely like never before.”

Marquez’s latest operation in December is likely to rule him out of the opening races of 2021, though Honda is yet to officially offer a recovery time.

Rossi believes Marquez will return as “strong as before”, but dismissed him as being his “strongest rival” and admits it is “impossible” to “forgive” him over the events of 2015.

The Italian still believes Marquez conspired with Lorenzo to ensure Rossi lost the 2015 title (something no evidence has ever been given for) which resulted in their infamous Sepang clash.

“I’m sorry he can’t ride,” Rossi added. “If he is cured, something that no one knows at the moment, he will return as strong as before.

“What he did to me I cannot forgive him. When I think of those days, I have the same feelings as then, and six years have passed.

“I find it difficult that one day they can change.”